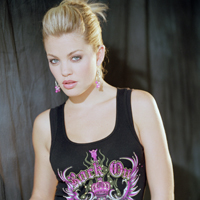 (SoapOperaNetwork.com) — February brings an altered state of reality for one Llanview resident who can never seem to handle her screwed up life.

Jessica (Bree Williamson) and Natalie (Melissa Archer) may be headed for the altar in the coming weeks but, in typical soap opera fashion, don’t look the nuptials to go off without a hitch. Fans can expect lots of drama, suspense, and heartache.

However, while most of those involved are able to cope with turn of events in a somewhat more reasonable manner, the same can’t be said for Jessica. That’s right…everyone’s least favorite alternate personality Tess regains control of Jessica’s fragile mental state beginning on Valentine’s Day.

But just what will Tess do with her newfound freedom, and could Bess (Jessica’s other personality) also make a return appearance? That remains to be seen, but watch out if either Jess or Tess ever reach for a pair of glasses again…

Wesley Taylor‘s “Creeper” character now has a name, and it is one some fans might recognize. The Broadway star, who taped scenes earlier this month, will be playing the bit part of Barton, who strikes out while hitting on a girl. A summary of the casting call, which was released last month, can be read here. An airdate has not been announced.  Taylor is good match with the description of the person the show was looking to cast in the dayplayer role, which was a Caucasian male in his early 20s, that was “overly confident, cocky, smarmy, and thinks he’s ‘hot,’ but is really a nerd.”

Baby Hope Thornhart (Madeline, Molly, and Tess Sullivan) will be seen again on Tuesday, Feburary 8 when Starr (Kristen Alderson) takes her to Statesville for a (off-screen) visit with her daddy, Cole.

Expect to see more of Matthew Conlon in the coming days as Paris gallery owner M. Claude Calmar, in scenes with tortured artist Tomas (Ted King), before the latter decides to take a trip to Llanview. Calmar made his “OLTL” debut on Friday, January 21, in scenes with Cristian (David Fumero) and Blair (Kassie DePaiva).

Harold Plaut returns as Clint’s (Jerry verDorn) thug Mr. Black on Tuesday, February 1. Look for Clint to give him and his other thug Mr. Blue (actor unknown) some further instructions. The goons were last seen in October when Clint ordered them to beat up on Ford (David A. Gregory).

And other dayplayer character appearing in the coming weeks will be Reverend Dennis, who will officiate the christening of Jessica’s and Natalie’s babies.