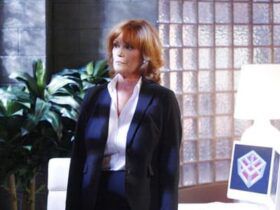 Kelly tells Rex she’s prepared to tell Joey how she feels about him. Joey makes love to a new woman in his life. Joey and Kelly come face to face.

Inez is stopped from telling Bo that Clint’s trying to use her to destroy his relationship with Nora. Clint gives Ford $50,000 to give to Eddie to get rid of him.

Looking for Starr, Todd finds James and learns he has been hit by his father. Todd relates his own experience with Peter Manning’s cruelty and claims death is the only way to stop an abuser, giving James food for thought.

Dani and Nate decide to “go all the way.”

Echo further insinuates herself into Viki and Charlie’s lives.