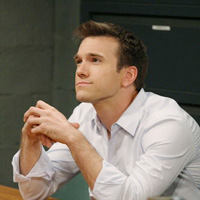 (SoapOperaNetwork.com) – “All My Children” actor wraps up his stint this week paving the was for his replacement.

Adam Mayfield makes his final appearance in the role of Scott Chandler this Friday, October 15. The actor, who is currently shooting an independent film, debuted in the role of Scott in April of 2009. Look for Daniel Cosgrove (ex-Bill, GL; ex-Chris, ATWT) to reclaim the role he played on “All My Children” from 1996 to 1998 this December.

On Mayfield’s final episode as Scott, look for Stuart Chandler’s (Mayfield) fallen son to share parting words with his cheating wife Annie (Melissa Claire Egan), his self-serving cousin JR (Jacob Young) and his bitter friend Marissa (Brittany Allen) before being carted off to an off-screen prison for approximately two months. 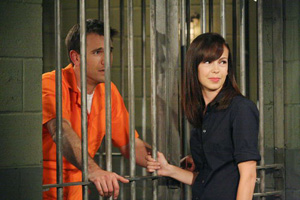 [Photograph of Scott and Marisssa, played by Adam Mayfield and Brittany Allen, from Friday, October 15, 2010 “All My Children episode. Photo by Paul Skipper/JPI.]

Brittany Allen, who was let go from “AMC” at the same time Mayfield was, will continue to air in the role of Marissa Chandler for the foreseeable future. The latest reports indicate that the role is still in the process of being recast.