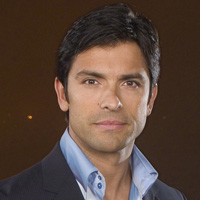 (SoapOperaNetwork.com) — Soap Star Mark Consuelos (ex-Mateo, “All My Children”) is set to host “Age of Love” and star in an Oxygen original movie.

On Monday, June 18, NBC will debut a new reality series in the vein of ABC’s “The Bachelor,” entitled “Age of Love” where contestants in their 20’s compete with women in their 40’s for the heart of Australian Tennis Superstar Mark Philippoussis. Mark Consuelos will guide Philippoussis in his quest to find true love with either one of the six “Kittens” in their 20’s or seven “Cougars” in their 40’s.

In other news, Consuelos has signed on to star opposite Nadine Velazquez (“My Name is Earl”) in the Oxygen channel original movie tentatively titled “Husband for Hire.” In the movie Velazquez plays Lola, a successful Latina businesswoman who finds herself having to find a mate to marry or she’ll lose her claim to the family fortune. Nate (played by Consuelos) is the man she hires to play her husband-to-be. Mario Lopez (“Dancing with the Stars”) Erik Estrada (“CHiPs”) and Tempestt Bledsoe (“The Cosby Show”) round out the cast.

Tim Perell and Howard Gertler of Process Media are executive producers with Kris Isacsson serving as writer-director. Filming on the project began two weeks ago in New Mexico. The film is set to premiere on Oxygen later this year.