Home / News / ‘One Life’ be Damned: Eli Clarke Back from the Dead? 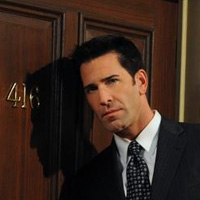 (SoapOperaNetwork.com) — Despite being shot and burned alive, Elijah Clarke makes a not-so-surprising return from the dead next week on "One Life to Live," begging the question that fans have long been asking, "Does anyone ever stay dead on this show?"

Even though the character, portrayed by "Old Navy" spokesperson Matt Walton, only died a few weeks ago, his reign of terror is far from over. Viewers tuning in to Friday's episode were left with the assumption that it was another presumed dead character, Téa Delgado (played by Florencia Lozano), that had summoned Dr. Gregory Evans (Terell Tilford) back to the hospice center in St. Kitts. However, expect it to be revealed on Monday's episode that Eli is alive and (somewhat) well, and continuing to pull at Greg's strings. But it's only the beginning. Look for Eli to continue wrecking havoc with the lives of numerous Llanview citizens in the coming weeks, as well as making an unusual request to someone he's presently blackmailing.

For those of you keeping track, the Eli reveal is thing that "happens in the first five minutes of Monday's episode," which was recently teased in an article on SOAPnet.com. As for the "other bomb" they are referring to, we'll never tell.