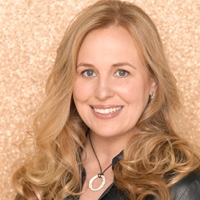 Lily pleaded with Neil to take the twins to stay with him; admitting that she thinks she's losing her mind regarding always seeing Cane. When Neil offered to stay with Lily at her house, she told him that she just wanted him to take the twins. Neil said that he had some business to attend to with Katherine, offering for her to join him. Up to being around other people, Lily stated that she would follow him in her own car. A worried Neil headed out with the twins in tow.

Caleb continued his conversation with the woman that emerged from the shadows. He minced no words when he told her that he hated having to work with the likes of Colin. As he talked, Colin showed up at the park out of nowhere, which caused the woman to quickly hide. Colin complained how Neil was messing up their plans and ordered him to head back over to Lily's to continue working on her. Without much of a choice, Caleb headed over to Lily's. When he arrived, a frazzled Lily, who was on her way to meet Neil, ordered him to stay away from her, convinced that he was her imagination. She told Cane that she had to focus on what was real. Cane pulled her into an embrace but it only frustrated Lily more, as she ran out of the house ordering him to stay away from her.

Nikki arrived at an AA meeting and as it started, Abby, who wasn't aware of Nikki being there, opened up about her problems, yet admitted she didn't know for sure if she had a drinking problem. As Nikki listened, Abby told those in attendance of trashing her mother's wedding site and how she succeeded in ruining her relationship with her boyfriend and drank to the point where she can't remember what she has done. She continued to share how she was scared that she might have done something terrible while drunk. As all of the members stood to recite the Serenity prayer, Abby looked up to see Nikki looking back at her. Once the meeting had ended, Nikki and Abby approached one another. Nikki asked her if her blackout happened during the time that Tucker was hit, to which Abby admitted to. When Nikki questioned her further about the events that happened, a jumpy Abby hurried off.

Victor and Katherine met up with one another at his home, where she said she was seeing to it that she derailed Tucker's plans of buying up Newman's stock. A thankful Victor questioned if she thought on considering Victoria to run Jabot. Katherine told him she had too much on her mind regarding Tucker to give it any thought. In a kind question, however, Victor offered her a spot on the Newman board; to which she accepted. As the two friends talked, the topic of Nikki came up.

With Katherine still away, Neil showed up at the Chancellor mansion. When Colin saw Neil there with the twins, he eagerly wanted to help him. Neil took him up on his offer and explained that he would be taking care of the twins until Lily got better. Colin agreed that he was doing the right thing, while Neil had offered up a thank you for making him aware of what was going on with Lily. As for Lily, rather than head to Katherine's, she decided to get herself checked into a mental facility. Back at the mansion, Colin, out of earshot of Neil, called Caleb to report that Lily's father was messing things up by keeping Lily and the twins with him. After his conversation ended, Caleb met up with the woman, who was revealed to be Genevieve, his and Cane's mother. She promised him that she was going to take care of everything.

Nikki showed up at the ranch and told Victor that she saw Abby there at the AA meeting. When she shared that she believed that Abby could have been the one that was driving the night Tucker got hit, he accuses her of coming up with wild accusations. He warned Nikki to keep her notions to herself and told her to get out.

Nick met with Doris at Gloworm but was displeased when Adam arrived. She told him she wanted the two of them to work on proving that Sharon's death was an accident, not suicide. She stated that the insurance company had refused to pay the policy due to the belief that she committed suicide. Adam agreed to work with Nick in getting the truth out there. Nick said he would call the coroner in New Mexico and Adam would call the insurance company. While they continued to work on doing what needed to be done, Adam and Nick agreed upon doing a video for everyone to see that they were out to prove Sharon's true nature of death. Meanwhile, Victor, who had left the ranch, arrived at Gloworm and got into it with Adam over the house. When Nick showed up again with a map for New Mexico, Victor asked what was going on. Nick explained what he and Adam were doing. When Victor offered to assist, Adam told him no, while Nick admitted that Adam and he needed to work together to prove the truth. Nick said that they would be headed for San Pueblo.

At the farm, Sam asked Sharon if she wanted to go to the Memorial Day festival. Sharon told him that she didn't care to go. When Piper arrived, asking for help on her 4H sash, Sam started to help her with it. Sharon soon showed up and offered help as well. The young girl also attempted to get Sharon to say yes to going to the festival. Pipe became disappointed when Sharon said she didn't have time to go to the festival. Piper asked Sharon if she could see her laptop. Once the girl was gone, Sam questioned why Sharon didn't want to go to the festival with them. She admitted that she felt awful for telling Piper no. She then agrees to go to the fair, thanks to Sam's insistent charm.