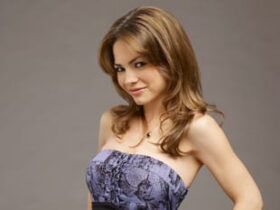 (SoapOperaNetwork.com) — A look at what’s happening on “One Life to Live” during the week of September 13, 2010.

Kelly forces Dorian to face the world again and drags her to a meeting with Bo and Nora on Tuesday, September 14. Kelly offers Rex a job tracking down David, saying Dorian needs closure. Kelly gets more than she bargined for when Dorian slugs her during a role playing exercise. Clint gets Inez up to speed on the Buchanan men’s history with Nora. On Wednesday, September 15, an uncomfortable Bo and Nora join Clint and Inez at the Palace. Elsewhere in Llanview, Vivian asks Destiny and Darren if they practice safe sex on Monday, September 14. Layla promises Crisitan they can make things work, and manages to persuade him to extend their engagement by a year. Gigi tells Rex she had a bad first day at LU, and later decides to enroll in Cris’ art class. And, on Thursday, September 16, Gigi wonders if Kelly wants Rex for herself when he tells her of his new assignment.

The Inside Story: Back from the Dead

Todd and Dani grow closer after he admits that he lied to her about Ross on Monday, September 13, at which time she shows him the strange text message she recently received. Natalie is thrown for a loop when John reveals that he isn’t sure if Eli is really dead. At the hospice center, Greg is horrified to find Eli there waiting for him. Eli explains to a flabbergasted Greg how he managed to fake his own death. Back in Llanview, Todd and Dani are surprised when Ross pays them a visit on Tuesday, September 14. After confessing that he sent Dani the text, he states that he came to take her back home to Tahiti. Todd confronts Ross about his connection to Eli’s crime spree. Ross admits that he was his brother’s accomplice and produces Téa’s will, which names him as Dani’s legal guardian. Meanwhile, Greg gives Eli a check-up, and diagnoses him with a subdural hematoma. On Wednesday, Sepetmber 15, Todd is both shocked and suspicious regarding the alleged will. John arrives on the scene and takes Ross into police custody. Eli orders Greg to give him plastic surgery to make him look like Ross. At the same time, Renee allows John and Natalie to search Eli’s old room at the Palace for evidence that the burned body in Tahiti isn’t Eli’s. Meanwhile, Ross is on the verge of getting what he wants.

Blair asks Dorian if they can hold Téa’s memorial service at La Boulaie and realizes her aunt still isn’t over David’s latest betrayal. John reminds Ross that Téa’s will must be probated before it can take effect, and asks the on-duty cop to trail Ross on Thursday, September 16. Natalie informs John that she has found some DNA evidence. Jessica and Brody reaffirm their love. Natalie is grateful Brody has agreed to keep their secret. As Téa’s memorial service progresses, the tension between Todd and Ross increases. Eli secretly records Todd’s bribe attempt and threat to murder Ross on Friday, September 17. Dani tells Nate that she is sure her mother wanted her to remain with Todd. Eli puts enormous pressure on Greg to return to the hospice center. And Natalie and John learn that Eli’s “body” has disappeared, prompting Natalie to ponder how they’ll prove their hunch. Also, after talking to Kelly about Ford, Langston lures him into a kiss while secretly recording the incident. Ford is fired from his teaching job at LU after Langston sends the photo of the two of them kissing to the Dean. James promises Cole he is keeping his word about staying away from Starr. And James tells Starr that Langston and Ford are back together.