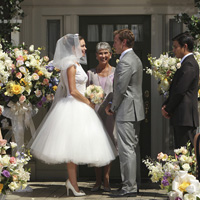 (SoapOperaNetwork.com) — "Entertainment Tonight" went behind the scenes to capture the love and romance behind Billy Abbott (Billy Miller) and Victoria Newman's (Amelia Heinle) wedding, airing this week on CBS' "The Young and the Restless."

In a homage to the 1950's, the duo's wedding was filmed on location on the front lawn of the house where "Leave it to Beaver" used to film in the 1950's and 1960's. "ET" also revealed that Victoria's dress is a replica of the one worn by Audrey Hepburn in the 1957 film "Funny Face," and that the two will be wed by Elinor Donahue, who will portray the role of Judge Anderson. Donahue is best known as Betty Anderson in '50s sitcom "Father Knows Best," which is the basis of the era's significance in the pairs nuptials.

The wedding begins on Wednesday, September 8.

"The Young and the Restless" air Weekdays on CBS. Anytime on CBS.com.