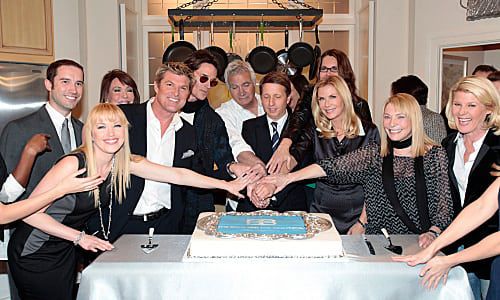 ‘The Talk’ Celebrates 25 Years of ‘The Bold and the Beautiful’

(SoapOperaNetwork.com) — ABC renews its commitment to keep “One Life to Live” on the air and a part of their daytime schedule through at least 2014.

Last Saturday, a story by the Denver Post left fans of the show feeling a sense of hope and confusion, stating that “ABC owns its soaps, unlike the CBS relationship with P&G. ABC’s ‘One Life to Live’ is soon to announce a deal to live two more years.”

Since the network does maintain ownership of all three of its daytime serials, an announcement that they they were planning to “renew” “One Life” for at least two more years does not and would not apply.

However, TVGuide‘s Michael Logan attempted to clarify the story Wednesday by reporting that he has learned from sources at the network that ABC’s commitment to “One Life to Live” has more to do with behind-the-scenes actions involving the show’s staff.

According to Logan, “OLTL” Executive Producer Frank Valentini, who celebrated his 25th anniversary with the show just yesterday (September 28th) has signed a new two-year contract to remain with the soap, while Head Writer Ron Carlivati, who has been with the show for 14 years (including the last three in his current position – with the exception of roughly three months in 2008 due to a writer’s strike) has penned a new three-deal to remain with the show.

Before replacing Gary Tomlin as Executive Producer in 2003, Valentini had worked in several positions on the show including stage manager, producer, and music composer. During his tenure with the show, “OLTL” has been either won or been nominated for several Daytime Emmy Awards, including nods for Directing, Outstanding Drama (which it won in 2002), and Best Original Song. The show has also been earned GLAAD Awards in 2005 and 2010.

Carlivati held the positions of writer’s assistant, script writer, breakdown writer, and co-Head Writer before assuming sole head writing duties in 2007. Carlivati and the rest of the “OLTL” scribes won a Daytime Emmy Award for Outstanding Writing in a Daytime Drama in 2008. They were nominated in the same category in 2002 and 2006. In addition, the writing staff was also nominated for WGA (Writer’s Guild of America) Awards in 2003 and 2006.

Look for a post-deal interview with both Carlivati and Valentini to be posted on TVGuide‘s website sometime next week.