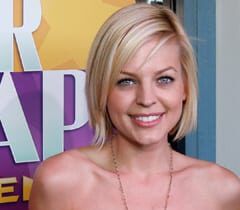 (SoapOperaNetwork.com) — A look at what’s happening on “One Life to Live” during the week of August 9, 2010.

“One Life to Live” will not air on Tuesday, August 10; an encore presentation of “General Hospital” will air in the 2 P.M. ET time-slot.

Natalie tells Brody she is pregnant on Monday, August 9, and that she isn’t sure who the father is. She then confesses that she contemplated aborting the baby, but changed her mind since it may be John’s. Viki and Charlie return home from their vacation on Wednesday, August 11, when they learn of Jessica’s pregnancy.  Meanwhile, John wonders what is taking Natalie and Brody so long at the crime scene. On Thursday, August 12, Natalie tells John she wasn’t feeling well and had to tell Brody she was expecting. John continues to warm up to the idea of having a baby with Natalie. Gigi vows to Brody that she will keep his and Natalie’s secret. Elsewhere in Llanview, Inez confesses to Nate that Ford and James are his brothers, and later tells Bo that she took his advice. Starr talks with Langston about James’ feelings for her. As they comfort one another, Dani urges Nate to make peace with his mom. Langston agrees to go out on a date with James. And Jessica demands the truth from Ford on Friday, August 13.

The Inside Story: Final Wishes

Blair accepts Téa’s request that she become Dani’s mother and legal guardian upon her death on Monday, August 9. Meanwhile, Todd and Dani remain upset over Téa’s decision to die alone in hospice care. Dani pleads with Todd to try and change her mother’s mind, however he tells her that they must honor her wishes. On Wednesday, August 11, Todd and Dani say their final good-byes to Téa, who implores Todd to be a better person for their daughter’s sake. Later, Todd becomes increasingly distraught over Téa.

Eli knocks Cristian out and makes off with Evangeline’s file on him. Layla accompanies Cristian to the hospital on Monday, August 9 to get checked out. Kelly begins her own investigation of Eli. On Wednesday, August 11, she rummages through his room at the Palace, before taking refuge under his bed when he returns unexpectedly. As Eli shreds the stolen file, Kelly sends a frantic text message to Rex asking for help. After making a get-away, Rex and Kelly return to La Boulaie with the shredded file on Thursday, August 12. Later, Rex informs Kelly that Natalie has agreed to do what she can to help piece the file back together. John talks to Eli about Hannah’s recent suicide attempt. Afterward, he reminds Hannah what will happen if she squeals. Cole tells John he has doubts about Hannah’s guilt. On Friday, August 13, John tells Hannah they need to talk about Eli.