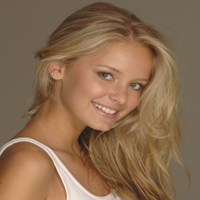 (SoapOperaNetwork.com) — “One Life to Live” announces the name of the character Taylor Gildersleeve will portray in Llanview.

Two days after the actress tweeted that she had “just booked a role on ‘One Life to Live,’” a show spokesperson has confirmed the news to ABC Soaps in Depth.

There had been some question as to exactly which role the ex-“AMC” starlet had auditioned for, considering that there are currently three female characters being cast by “OLTL.”  However, SON can now report that Gildersleeve will portray the recurring character Leah, a stripper friend of Stacy and Kim from their days in Las Vegas.  To learn more about the recently released audition script for the role, click here.

No first airdate has been announced for Gildersleeve, who portrayed Sydney Harris on “All My Children” in 2007.  SON will continue to follow the story.

Winning the Miss New York Teen USA 2009 title, Gildersleeve competed in Miss Teen USA Pageant, but failed to make the finals. A student at New York University, she has also appeared in an episode of “30 Rock.”