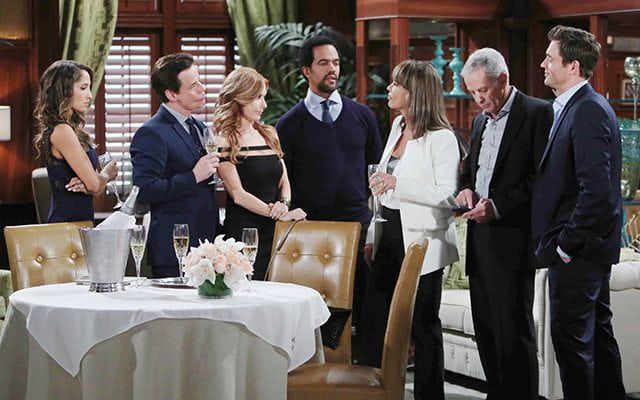 Karen gets an eyeful,Wednesday, February 18 when she sees Neil and Tyra getting down with some serious lip-locking. Jill and Amber get into it over the DNA results. Victor gives Ashley the opportunity to sit on the board at Newman Enterprises but she instantly becomes wary. Victor isn’t the only thing that is troubling Ashley; Brad’s will is read on Thursday, February 19, and who is left in charge of Abby’s trust has Ashley flabbergasted.

The Inside Story: Whisked Away Not wanting to be out-witted by who he believes is Marge, Clint decides to kidnap Katherine to eliminate the competition for Kay’s millions. The minute Kay sees her abductor face-to-face, the memories of Clint come flooding back. Katherine immediately tells Clint she knows who he is and what he did but unfortunately for her, Clint doesn’t believe it, continuing to believe she’s Marge. Meanwhile, Michael gets the results of the DNA test he had done on Katherine and the results are damaging; there is no proof that Jill is biologically connected to Katherine. Jill immediately flaunts that she knew that Marge was running a scam on everyone. Her mouth sets off Amber who instantly gets in Jill’s face, telling her that Katherine is really alive. Roger, hearing the news, instantly contacts Clint, who berates her for ‘lying’ and will take care of her instantly. Things don’t bode well for Clint when Roger comes back with news that Esther is stalling on getting married to him. Clint goes into a tissy which sparks a vital memory from Katherine. When Katherine relays it to Clint, it leaves him shaken to the core.

A Closer Look: And Baby Makes Five
After admitting to Lily that he is the father of Chloe’s baby, Chloe shows up at the cabin, where Lily lashes out at her for all her schemes, which pushes Chloe into labor. Unable to leave the cabin because of the storm Lily quickly calls Olivia. Over the phone Olivia instructs Billy on what to do to deliver the baby. Once the baby is delivered, Billy and Lily have to put asside their argument and get Chloe to the hospital. Using a sled they use it to take Chloe to Cane who is waiting with an ambulance. The minute the baby, Chloe and Cane arrive at the hospital, the doctors report back that there were complications and that both she and the baby are in danger. Meanwhile, alone, Lily tells Billy he needs to step up and tell Cane that he’s the father. That however doesn’t go as planned when Billy goes to the bar to drink away his problem. He’s not alone when he finds a new drinking buddy; Sharon, who is also there to drink away her sorrow. The two soon start talking and then later leave…together. Back at the hospital, Chloe, who is feeling pangs of guilt debates on telling Cane the truth.