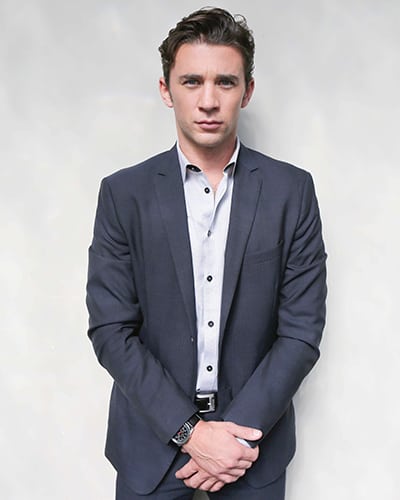 “Days of our Lives’” fans have had 32 years of dark DiMera family amusement through Stefano (Joe Mascolo) and later the addition of EJ (James Scott), but it looks like the newest family member will be giving his predecessors a run for their money! Billy Flynn debuted as the new darker and vengeful Chad this month, and it’s been quite obvious that the apple has definitely not fallen far from the tree. But just what can fans expect from the character as he continues to ingratiate himself back into Salem? Soap Opera Network spoke with his new portrayer to find out!

Flynn’s version of Chad swooped back into town with one hell of an introduction: The vengeful DiMera youngster — having been “developing” under Stefano’s wing since leaving town last fall — had an immediate and very tense confrontation with EJ that included physical assault and a gun! And that was just the tip of the iceberg of stellar moments that Flynn has experienced since joining the show: Having had the opportunity to work with some the show’s top-notch talent — Scott, Alison Sweeney (Sami) and Eileen Davidson (Kristen) — right out of the gate has been invaluable for the Minnesota native.

Take Davidson, for example, whom Flynn admits he was in awe over. “The situation my character was in, I didn’t get to do much but listen to her, which was still amazing, because I just got to sit and watch her,” he explains. “And then I would suddenly be reminded that I had to say something every once in a while! It was a lot of fun, and I wish it could have been longer. There are certain people you want to be in the ring with, and I got to do it with James, and I got to do with Alison, and I would love to do more with Eileen. Just to get in there, two people going at it.”

Sweeney, he says, was just as awe-inspiring as Davidson: “She’s so talented. I love her as a person and as an actress. I’ve seen her do some stuff that I couldn’t imagine any Oscar-winning actress do for as long as she did it. You know, these 12-hour days with as much dialogue as she has, and to still give those performances? She’s incredible.”

Of all the leading actors on the show, however, Flynn connected with Scott the most as the onscreen brothers’ relationship developed leading up to the England native’s departure from the canvas. But Flynn admits it took some time for he and Scott to bond. “I was really intimated,” he explains of having to jump into such a tense storyline with Scott right away. “He put me at ease. He was very sweet to me and gave me great words of encouragement. So it made it easier. But I was really nervous. You’ll see, as our scenes go along, it started very disconnected, which I think worked. I wasn’t familiar with him, he wasn’t familiar with me, I had a gun to his face, it was really the first scene I’ve ever done on television — ever — so you’ll see over the next couple of weeks in our scenes that we get really comfortable with each other. There’s some really strong acting that we get to do together. [Tuesday] October 7th, I think, is my favorite to date, where EJ confronts Chad on some stuff that he had said to somebody else, and it’s just no holds barred. It was a lot of fun.”

The question many fans have been wondering is how much of Chad’s new darker direction was influenced by the writers, and how much was influenced by Flynn himself. The answer: A little came from both! “I had my own thoughts from the audition process. I played it darker,” the actor reveals. “I knew that [former portrayer Casey Deidrick] left, and it was also a reboot as well as a recast. So they kind of gave me free reign, within the limits of what has happened — he hasn’t come in as a complete maniac — but they gave me free reign to say, ‘I want to make him a little darker, a little more sinister, witty and sarcastic, kind of a full-fledged person.’ He is a DiMera, so he needed to step into the role and be able to be a threat.

“He’s very different,” Flynn continues. “I mean, he got shot, he’s been betrayed by everybody in his life or abandoned by everybody in his life, then he becomes part of this new family and his brother does it again. I mean, it’s an overhaul. He’s coming back as a person that is trying to be more than he is. Everybody talks about the suits and wearing the suits, and I think, you know, he’s coming back and the suit is wearing him. But you’ll see him wear the suit eventually. He’s puffing up his chest, he’s doing things he wants, and he wants his DiMera birthright. He’s like, ‘You wanted me to be a DiMera? Well, you got a DiMera.’”

Some viewers have speculated that since Scott’s EJ will soon be leaving Salem, this new Chad is meant to help fill some of the void. But is that what Flynn thinks, as well? “Nobody can replace EJ, obviously,” the actor states. “So he’s not an EJ 2.0. He is a DiMera, so you’re going to see, there is a void that is going to be have to be filled. I can’t say if I’ll ever do it justice, to what [Scott has] created, but it’ll be different. And it’ll be my way of doing it, I guess. That’s a tough question to answer. He’s definitely not going to be replaced. You’ll see me trying to doggy paddle to catch up, I think!”

While hoping to claim his stake in the DiMera history, Flynn says you’ll also see Chad simultaneously trying to win back Abigail (Kate Mansi). “Abigail is the one that he wants to be with or thinks he’s supposed to be with, so you’ll always see their worlds orbiting each other. And I think he’s going to try as hard as he can to make it happen. “

But is Chad at all worried that his vengeful attitude might be unattractive to Abigail, who had always tried to keep Chad’s DiMera attitude at bay? “I don’t think so,” Flynn says with a slight chuckle. “I think Chad assumes at this point, because she’s been with him and his brother, that she’s sort into the dark side.”

That being said, the actor teases that Chad won’t always be so bad; there are little nuggets of the loving, compassionate Chad of the past tucked deep inside. “You’ll always see the internal conflict,” he reveals. “Being that kind of person, being a DiMera, it takes its toll on your soul. Not everybody is that bad. And even the people that are that bad… it still affects them, and so it was very important for me to show that, and you’ll see that. You’ll see that he’s just not a bad person. He’s doing things because he thinks it’s right. If he hurts somebody, he’s not doing it to hurt them. But when it does, it does affect him. So you’ll see that inner conflict all the time with him.”