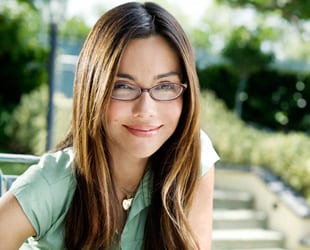 (SoapOperaNetwork.com) — Vanessa Marcil, 40, may have quit daytime in 2003 and hit it big in primetime from then on, but she has never forgotten her roots. In fact, she put a little bit of herself in Kate Hewitt, her character in the Hallmark Channel Original Movie “The Nanny Express.”

Kate loves her soaps – she watches her favorite daytime drama “Ray Loves Lisa” everyday. In it, Kate’s best friend, Lisa (Dorie Barton), is unable to admit she has a crush on bus driver Ray (Peter Dobson), whose route they ride everyday. Kate’s father, Jerry Hewitt (Dean Stockwell) has been suffering with heart disease since she was in High School. Recently out of work, Kate is desperately in need of funds to pay for her education – she is pursing a degree in teaching. She also helps out at her church as a tutor for under privileged kids. She’s a woman with a heart of gold. No wonder David Chandler (Brennan Elliott) finds himself smitten with Kate after she takes a job as the Nanny to his two kids, Ben and Emily.

Ben (Uriah Shelton) and Emily (Natalie Dreyfuss) Chandler lost their mother in a deadly car accident on Emily’s 12th birthday. Since then, they have run off 20 Nannies through childish pranks and crazy antics. Nanny #21 (Kate) is no different. Want a scare by a rat? Check. Have more soap in the wash than clothes? Check. Cooking a meal at 350 degrees? Why not put it at full Broil? How about sprinklers getting you all wet? Kate has everything thrown at her, including a book, but she is the first Nanny who seems to be able to handle the Chandler children.

While Ben starts to grow attached to Kate while she helps him with his homework, Emily makes it her mission to get Kate to quit and continue the Nanny cycle. She even goes so far as ensuring that her father falls for her dance teacher. Of course, this being a film starring Marcil…that won’t happen. Even after losing her father, Kate still tries to make amends with Emily by letting her know that she does understand where she is coming from. Emily takes her gift and rudely throws it aside.

While I’m sure it was her father’s passing that causes Kate to move on, Emily gets her wish and Nanny #22 arrives just in time. Of course, Kate isn’t totally out of the picture and Emily finally sees the error of her ways.

“The Nanny Express” is a predictable, rushed and ridiculous film that is only saved by Marcil’s on cue crying and Dreyfuss’ ability to play a rude, snotty daughter so well that you just might want to throw a book at her. Emily is a cold-hearted little brat, who you just can’t seem to feel sorry for. She may have lost her mother at a young age, but she has no redeeming qualities that I could find. Elliott plays a hopeless romantic, but lacks the ability to control an out of control child. Meanwhile, Stockwell may not have many lines, but he plays an ailing father well enough that you too will cry along with Marcil as he sees the light. Barton and Dobson’s Lisa and Ray deserved more, as far as the writing is concerned, as they are pushed aside and used only as a way for Kate to deal with her problems.

Between flubbed lines (Vanessa, while having a drink with Elliott’s character and Elliott while talking to his on screen daughter during the birthday gift scene) and inconsistencies (Vanessa is wearing flats with her flower dress in one scene and knee high boots in the next) that went unnoticed, the movie is a flat out mess. The worst of all? You can’t catch a scene without some dose of music that is supposed to warm the heart, but borders on annoyance instead. If you are looking for quality writing, this isn’t for you. Otherwise, if you are looking for heartfelt melodrama, tune right in!

An LG Films Production in Association with Larry Levinson Productions, “The Nanny Express” airs Saturday, January 3 at 9/8c on The Hallmark Channel.

Larry Levinson is the executive producer, Randy Pope, Matt Fitzsimons and Michael Moran are the co-executive producers and Jim Wilberger and Erik Heiberg are the producers. Bradford May directed from a script by Judith Heiman Kriegsman, Stephen Langford and Riley Weston.