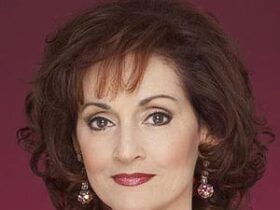 (SoapOperaNetwork.com) — Karma has a way of coming back to bite you when you least expect it.

Tina and Cain, overjoyed to be reunited, explain how they tricked the people of Mendorra into believing that Cain was actually Prince Heinrich, the rightful heir to the throne. Tina remains concerned for Sarah’s safety; however, Cain isn’t ready to give up the good life just yet. Carlo Hesser keeps Sarah and his daughter Talia imprisoned in the dungeon, and has ominous plans for them, Tina, Antonio, and Cristian. Antonio is shocked to see Cain once more. Sarah is reunited with Cristian just as Antonio is tossed into the dungeon with Talia. Carlo comes face-to-face with Antonio. Sarah informs Cristian that Carlo is the brains behind the operation.

The Main Event: The Grandfather is Always the Last to Know

Todd fumes with anger upon learning from Cole that Starr is pregnant, and becomes even more enraged by the news that Starr plans to hand the baby over to Marcie and Michael. Meanwhile, Michael points out to Starr all that is wrong with her decision. Marcie promises Starr that she will try to sway Michael’s mind. Todd confronts Starr and Blair, and vows never to allow the McBains to have her baby. Marcie is unable to change Michael’s mind. Cole confesses to John that he came clean with Todd. Marcie remains undeterred by Todd’s continued threats, while Michael can’t bear the thought of watching Marcie lose another baby. Starr blasts Cole, and tells him that he has awakened a sleeping giant, who won’t rush to his aide. Blair appreciates John’s support.

Just as they are about to tie the knot, Bo and Lindsay’s wedding comes to a standstill, thanks to Nora. As Nora displays RJ’s incriminating letter for all to see, Clint questions her motives for exposing the truth. Lindsay’s confession to Bo is too little, too late. Rex stumbles across Bo hitting the sauce at his apartment. Rex is unsuccessful when he tries to reach out to Bo. Lindsay is aghast when Nora has her arrested for murder, and accuses Nora of wanting revenge, as well as Bo all to herself. Lindsay shocks Nora when she pleads guilty in court. Rex learns that Bo has moved out of his garret.

Tess, still posing as Jessica, asks a delighted Viki if she and Bree can move back into Llanfair. Tess then invites Natalie and Jared to move in as well, claiming she needs her family to close to her. Charlie, along with Roxy, learn that he wasn’t drinking at Rodi’s the night he blacked out. Roxy manages to get Charlie to retrace the event of that night, which prompts him to recall that his last memory was bumping into Dorian at the hospital. Charlie then confronts a nervous Dorian, who denies any involvement. David informs Viki that he has married Addie. Charlie tells Viki that he believes Dorian is somehow involved in his falling off the wagon. Heartbroken, Viki confesses to Charlie that, while she still loves him, she can’t forgive his lies and deceit. Viki is privately concerned to learn that “Jessica” has invited Natalie and Jared to live at Llanfair with her. Clint ponders if David and Addie’s trip down the aisle could be the missing piece in defeating Dorian. Marty demands to know more about her past. Rex tells Gigi that he isn’t sorry for what she said at the wedding, and admits that he cares for her. After receiving a phone call from Adriana, Rex pulls Gigi into a kiss. Brody and Shane interrupt Rex and Gigi’s warm moment, and later, Brody makes it clear to Rex how he feels about
Gigi and Shane.

Tuesday: Todd and Cole are pit against Starr and Marcie in court. Clint and Nora decide to attack Dorian’s through her weaknesses. Langston pulls out all the stops in her plan to blackmail David.

Wednesday: Tess has murderous intentions. Viki finds herself in the wrong place at the wrong time. Charlie and Gigi yearn to be with the ones they love.

Thursday: Bo receives the shock of his life. Jessica begs Tess to drop her quest for revenge. Carlo exposes Tina and Cain.

Friday: Dorian makes an unnerving discovery about Viki. Bo and Rex fight for their lives. Carlo makes his plans clear.