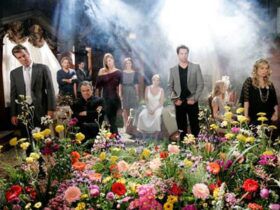 Aidan helps get Amanda out of a jam. Jack is saddened by the fact that Lily will soon be leaving for college. Samuel offers Jesse the job of Chief of Police. Erica gets the idea to do a new show, New Beginnings: Behind Bars. Angie makes an impassioned plea for Jesse not to return to police work. Frankie tends to Randi, a woman he suspects is being abused.

Only Adam is able to comfort Kathy after she’s told about Julia. Tad later explains to Kathy that he’s her father. Alone in the chapel, Tad senses Dixie’s presence and is certain she helped reunite him with their daughter. Dixie tells Adam not to give up hope. Krystal shows up at Adam’s door. Dixie assures Tad that she is at peace. Dixie wants Tad to be happy and knows he’ll find love again. Tad and Dixie share one last kiss before she dissolves into the light.

Greenlee asserts to Josh that their hooking up was just a one time deal. Greenlee’s good mood doesn’t go unnoticed by Amanda. Aidan professes his love to Greenlee. Zach is pleased to find Greenlee in better spirits but questions her thinking when he discovers she had a one night stand. Zach thinks Aidan still loves Greenlee, but she doesn’t want to talk about her ex. Aidan resigns from his position at Cambias. Zach doesn’t think Aidan is good enough for Greenlee and warns him to never hurt her again or make another move on Kendall.

Zach wonders why Kendall always tries to push him away. Kendall would initiate lovemaking but Zach just wants to hold her in his arms. Kendall turns to Erica. Kendall is unsettled when she sees Zach and Greenlee in a playful moment. The tension between the two women escalates as Greenlee teases Kendall about her “mystery” romp. Greenlee and Kendall warm up for their tennis match. Consumed with memories of seeing Zach and Greenlee together, Kendall ends up slamming Greenlee in the eye with her serve. Greenlee later has Kendall served with legal papers charging her with assault. Kendall advocates Josh pursuing Greenlee.

Annie injects herself with the fertility drug and fantasizes about getting pregnant with Ryan’s baby. Realizing what she’s up to, Richie blackmails Annie…again. Ryan makes plans to leave town to consult with a doctor about restoring his memory. Annie convinces Ryan to postpone his plans and anticipates seducing him later that night. Ryan takes Greenlee on a motorcycle ride. Ryan believes that Greenlee wants to be friends with Kendall again. Furious that Ryan hasn’t returned home, Annie heads out to confront Greenlee.

JR rescues Babe in the nick of time. Treena tells Babe and JR the truth about Richie. JR has Richie beaten up and then holds him hostage. JR threatens to kill Richie while getting him to confess to his crimes. JR plans take an unexpected turn when Richie goes into convulsions. JR tells Jesse, Babe and Angie that Richie stole his bone marrow. Jesse wants to get to the bottom of JR’s story. Richie feels the walls closing in on him but runs into Zach as he tries to leave the hospital.

Monday: Annie accuses Greenlee of wanting Ryan for herself. Zach forces a confession out of Richie. Kendall and Greenlee make some headway towards rebuilding their friendship.

Tuesday: Angie and Jesse remain at an impasse. Erica proves she’s a star even behind bars. Richie’s crimes begin to catch up with him.

Wednesday: Ryan defends Annie to Greenlee. Krystal has no intention of walking away from Tad. Richie’s web of lies is quickly unraveling.

Thursday: Adam learns of JR’s duplicity. Aidan asks Greenlee if there’s any hope for them. Randi wishes Frankie would just mind his own business.