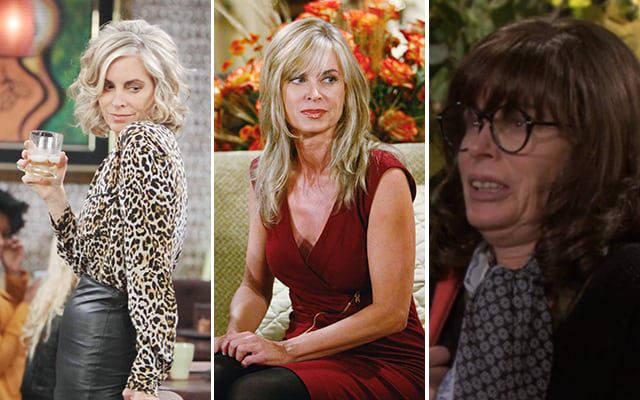 While it’s no cover story, when was the last time a daytime soap opera captured a full-page writeup in a major magazine? In the latest issue of TV Guide Magazine, on newsstands now, “Days of our Lives” is highlighted as the top choice for what’s worth watching when the soap recreates the iconic moment where Dr. Marlena Evans (Deidre Hall) levitates over her bed following her recent re-possession by the Devil on the Tuesday, October 12 episode.

“We felt the time was right to revisit [the possession] with some very new twists and turns,” executive producer Ken Corday told the publication. “The special effects are even more special, and the scares are more intense.”

While the first possession storyline was unwillingly brought on by Marlena’s vulnerability after being hypnotized by Stefano DiMera (the late Joseph Mascolo), the updated version is led on by Marlena allowing herself to be captured in order to save her friend, Doug Williams (Bill Hayes), who was initially thought to have had signs of dementia. “Doug physically was not able to sustain that kind of possession,” Hall explains. “We were losing him, and the Devil said [to Marlena], ‘Your call.’” After ensuring Doug’s safety, a now re-possessed Marlena had Doug committed at the Bayview mental hospital on the October 4 episode so as to silence him from revealing what’s going on.

As for where the storyline goes from here, look for the next stage to involve newlyweds Ben Weston (Robert Scott Wilson) and Ciara Brady Weston (Victoria Konefal), and a re-possessed Marlena to crash the annual Horton family Christmas party. “It’s so much fun to be bad,” Hall notes.

From the picture above, it looks like “DAYS” was able to do a phenomenal job in recreating the levitation. What do you think?