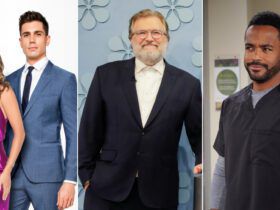 Over the summer, Hunter King and Michael Mealor made one of the hardest decisions an individual could make when it comes to planning out their future: Forgoing a steady income and successful career as an actor on a daytime drama series in order to pursue what’s next without being tied to what was. Even still, their popular pairing on “The Young and the Restless” as Summer Newman and Kyle Abbott, better known as #Skyle to their fans, remains a highlight for their careers which is why when asked to reprise their roles for a brief stint they jumped at the chance.

“It’s like going back to high school after summer break,” a smiling King recently told Soap Opera Digest in a joint interview with her co-star. “You’re excited to see everybody and all of the stress washes away for a little while. You walk in and it’s nothing but fun and joy and happiness because it’s like coming home.” She added, “The days have gone by so slowly since I was last there but as soon as I stepped into that building, it felt like yesterday. I have so many friends between the crew and the actors, so it felt so nice to be back.”

Their return to “Y&R,” beginning with the Tuesday, October 12 episode, wasn’t with their characters back in Genoa City as viewers will recall that when the duo was last seen together on screen in August, Summer and Kyle decided to make another go of their relationship while making Milan their home base. With Summer’s aunt, Victoria (Amelia Heinle) marrying Ashland Locke (Richard Burgi) in Tuscany it only made sense for them to pop in for the nuptials since the locale was so close being that both cities are in Italy. Of course, everything was taped at the “Y&R” studio located at Television City in Los Angeles, lest we forget that a typical soap budget couldn’t accommodate such a lavish event overseas these days.

Since leaving “Y&R,” Hunter has gone back to school. “I’m taking an accelerated math class that’s only six weeks long, but next quarter, I’ll be taking a lot more classes. As of right now, my major will be psychology. And hopefully, I’ll be working that in with acting, but I’m in the pursuit of learning as much as I can and constantly growing as a person,” King says, noting, “Depression is something I’ve struggled with for years, so I’m passionate about finding ways to not only help myself but others in that way. That would be extremely rewarding for me. I also went to Europe for a while and I’m also auditioning but I feel like I’m at a weird crossroads in my life of, ‘What do I want to do next?’ I’m just taking it day by day of exploring what options are out there for me. I have a lot of things brewing, so it’s about finding out which one is the most interesting to me.”

As for Michael, he’s just going where the day takes him following a recent move to a new place while enjoying time with his dog. “I’m auditioning here and there, but only for things that mean something. Not that I have a bunch of money saved up and I can go on without having a job, but I’ve been acting for so long that I decided that whatever I do next, I want it to be fun. I don’t want it to be, ‘I need a job so I’ll just do this,’” Mealor explains. “Other than that, I’m discovering what my life looks like at this point. I’m trying to find a routine because I had been working so much that I don’t know what my hobbies are anymore. So I’m actually enjoying the time off.”

While they’ve moved on, they still embrace all the love, appreciation and support they’ve received from their fans. “For months there was an outpouring of constant comments and messages after we left that was truly incredible,” says Mealor. “I was only on the show for three-and-a-half years, and I haven’t seen any comings and goings that really had this response. Not to toot my own horn, but to give praise to the fans.”

Meanwhile, King shares, “As actors, there’s only so much that we can do and we really rely on the writing to propel us into great story. Summer and Kyle have had such a great love story over the years and a majority of fans were really rooting that they would get their happy ending. I have so much respect for what the writers have done with our characters and I have so much love for the fans for all of the support they’ve shown us over the years.”

With the saying being “never say never,” both Hunter and Michael would be open to returning to the soap but only for visits. “‘Y&R’ will always have a huge place in my heart,” King says. “I’m not sure exactly what the future holds and how often I’ll be back, and how often they want me to come back, but I’m always open to coming back.”

“Of course I’ll always be back when they call,” Mealor adds, citing his love for the show and working with the people he’s worked alongside all these years.

For more on life after “Y&R,” and what it was like working with their fellow actors again, make sure to read the full interview here.