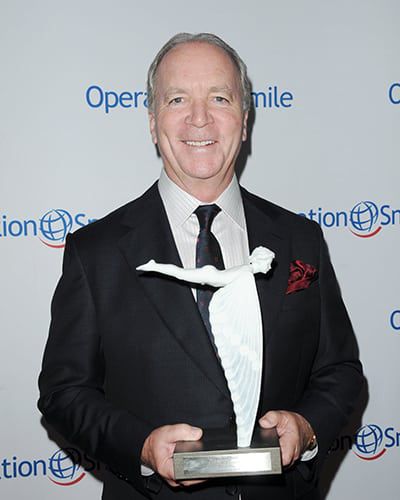 Charles Shaughnessy heads back to the soap world with not just one but two different roles on two different shows, and on two different platforms. First up was his surprise return to ABC’s “General Hospital” on Thursday, September 2 playing a recast Victor Cassadine, and beginning Monday, September 6, he reprises his role as ISA agent Shane Donovan on “Days of our Lives: Beyond Salem,” the five-part limited series spinoff of “Days of our Lives” that sets the stage as Peacock’s first foray into an original soap opera. In preparation for his return to soaps, Shaughnessy recently spoke with Soap Opera Network about how he got the call to join the series, his top-secret “General Hospital” role, and how streaming just might be the future of soaps.

Since his 1984 debut on “DAYS,” Shaughnessy has popped back into Salem for short visits here and there, including his most recent visit in 2017 when he appeared as both Shane and his twin brother, Drew. However, short stints are how Shaughnessy likes it, as long as it makes sense. “I’ve been back to ‘DAYS’ every now and again, sort of an on and off type favor. Occasionally they’ll ask me to come back for like two or three days during sweeps, or special kind of occasion, and I’ve always said, ‘No! I’m not going to just come so you can do like a quick line or two and then I’m gone,’ but if it’s a nice story, I’ll absolutely come back because I love my time there,” Shaughnessy shares, adding, “I really enjoy the people. They’re like close pals and I really enjoy the storylines and the characters.”

When he got that call that Peacock was doing a spinoff of “DAYS,” Shaughnessy jumped at the chance. “So, I’ve been back [at ‘DAYS’] from time to time but this came out of the blue. This was Peacock. I heard from my agent that Peacock decided they wanted to do this standalone five episodes streaming, like sort of mini-series, like some limited series called ‘Beyond Salem’ that was basically ‘Days of our Lives’ but a streaming version,” he reveals while noting that there was a time early on that he understood the show would also have a different look and feel in comparison to the parent series.

While the spinoff will look more like the mothership than originally thought from a visual standpoint, that’s not necessarily a bad thing as “DAYS” has been producing consistent daily drama for 56 seasons, a feat few shows have reached. Either way, at the end of the day, the idea for a spinoff was brought to the “DAYS” producers by Peacock and one of the things they made clear was that they wanted Shaughnessy back as Shane. “Peacock had specifically said they wanted Shane Donovan as part of this because he’s the sort of ISA guy who can bring it together,” the actor says about how the storyline itself flows together. “I thought, ‘Well it sounds like a wonderful idea. Great gig, a week’s work…I get to play with my old pals, I can bring Shane Donovan back to life and have some fun. That’s how it all happened and I signed on very happily. We did it over a week and it was just a joy.”

As for what fans can expect from “Beyond Salem,” Shaughnessy gave us the scoop when he revealed that the Alamanian Peacock is a “device that has different parts that are scattered in different locations, and if these different parts get brought together, they will form a kind of weapon that threatens Salem as well as many other major cities.” He points out, “It’s like the ice machine, the crystal…all those 80s things [where] the bad guys were developing to hold the world for ransom. So, our intrepid characters are busy trying to find these missing pieces and put them together for good rather than for bad. It was like a classic storyline from the 80s using the same sort of characters, and so it had a bit of comedy, it had a bit of adventure, there’s a bit of a romance, all those elements put into the pot as a streaming version [of ‘Days of our Lives’].”

Giving credit to the show’s writers and the “clever” way they pulled things together, Shaughnessy hopes there will be more of “Beyond” than the original five episodes ordered. “I hope they do more because I’ve always felt that streaming, if it’s used right, is the perfect home for a soap.”

Another reason streaming would be perfect for the future of soaps is due to how services like Peacock can help bring fans together as they were before the age of multi-platform television. “I remember the days when fans would watch the show at the same time while they’re all on the phone with each other so they would have like a kind of conference call with five other people while they’re watching so they can be talking about what’s going on,” recalls Shaughnessy, who points out that streaming is able to do that and more efficiently. “You can stream it and you got a chat room going at the same time or at ticker speed. It’s [soaps] always had that potential so to do this and put a chunk of it on a streaming platform where people can interact and have comments and tweet with each other, it’s perfect,” he says.

When Shaughnessy found out that the Alamanian Peacock was a direct reference to the streaming platform and NBC’s branding as the peacock network, he found it as a source of amusement.  “I have to say, especially when you see the actual… they actually built the Alamanian Peacock and it’s clearly the NBC peacock [laughs]. I mean, it’s great, I think that’s brilliant. That’s all branding. The whole thing is slightly tongue in cheek, the whole kind of story is a little bit of a tongue in cheek nod to those 80s soap opera stories, and I thought, ‘Making it the NBC peacock with these jewels exactly like the logo is brilliant.’”

Unfortunately, because of the pandemic, the time for getting together with other cast members and reminiscing about the past wasn’t to be. “It was a joy to be back there and to see some of the people,” begins Shaughnessy. “The only sad [part] was because of COVID everyone is siloed. You can’t mix with each other, so there’s no kind of hanging out at the canteens for lunch or dropping into each other’s dressing room. That was all forboden. So, I didn’t get to say hi to everyone that I would have liked to have done but quite a few, and I worked a lot with Deidre [Hall] and Drake [Hogestyn], so I saw them quite a bit, and Lisa Rinna. It was just a really fun week.

With only five episodes available one has to wonder how they are able to spread things around to accommodate such a large cast, but we can reveal that Shaughnessy will appear in four of the five episodes — one, three, four, and five. “The way they shoot these things now is so complicated, I mean if you saw a daily schedule, it’s like plans for the invasion of Europe,” Shaughnessy jokes. “It’s unreal how complicated the schedule is because you have a bit of about four different shows, you’ve got three different directors working on different sets.”

Another tidbit we can confirm is that it was clear Shaughnessy’s reprisal as Shane Donovan would only be for the spinoff as the show’s producers made it clear they wouldn’t be bringing the character back to the main show, at least there wasn’t a discussion of it at the time, and coincidentally it was around then that he got the call from “General Hospital” to portray Victor Cassadine. He debuted on the Thursday, September 2 episode of the soap opera.

While Shaughnessy couldn’t reveal who he’d be playing on “GH” at the time our interview took place as the reveal hadn’t aired yet, he did say that just as he finished up at “Beyond Salem,” he got the call from his agent about “GH.” “I just finished my ‘DAYS: Beyond Salem’ job working and literally about two days later my agent called and said that he had been working for a while with ‘General Hospital,’ and that there was interest in me joining ‘General Hospital’ for the next six months, so I’m actually doing that for six months,” Shaughnessy tells us exclusively of how long you can expect to see him in Port Charles.

Although Shaughnessy would have liked to have told us more about the character he was playing on “GH” when we spoke with him, he was sworn to secrecy, and leaks at the soap made him feel a little “skittish” as “literally two days after I went for my costume fitting it was all over the soap opera blogs.”

As for “Days of our Lives: Beyond Salem,” Shaughnessy wants the fans to know that what’s great about the series is that it is a self-contained storyline. “It’s not like on a [regular] soap where it just goes on and on, and on. This is fun because you can see it resolved. You see the storylines start and at the end of the five episodes it’s concluded, so that’s kind of satisfying, and it’s blending some of the older characters that have been around for a while with the new ones,” the actor tells us. “It’s an homage to the golden age of soaps but it’s also paying respect to what’s going on now. You’ve got young characters with some of the more classic… it’s like combining original Coca-Cola with Coke Classic. It’s like you’re putting the two together — new Coke and old Coke — and it’s exciting. A bit of romance, there’s a mystery, there’s an adventure, there’s a bit of everything thrown in there.”

“Days of our Lives: Beyond Salem” follows a multitude of Salemites as they deal with mystery, betrayal, and passion when they spend a long weekend out of town. With John and Marlena traveling to Zurich, Ben and Ciara spending a romantic getaway in New Orleans, Chad visiting some old friends in Phoenix, and Abe, Paulina, Lani, and Eli vacationing in Miami, they each find themselves embroiled in the mystery involving the stolen jewels which, being in the wrong hands, might cause dire consequences for Salem before they can even think about returning home. Joining them for the hunt will be ISA agent Billie Reed (Rinna) as she crosses the globe in search of the missing treasure.

One episode of “Beyond Salem” will release each day from Monday, September 6 through its finale on Friday, September 10. The series will be exclusively available in the United States on Peacock.

“Days of our Lives: Beyond Salem” Trailer