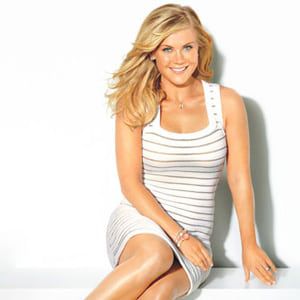 Greg Vaughan’s return to “Days of our Lives” was sadly a short one. The actor will exit Salem this week after his character, Eric Brady, heads back to Africa after learning his wife, Nicole (Arianne Zucker), had an affair with Xander (Paul Telfer).

On the Monday, July 19 episode of “DAYS,” Xander busts up Nicole and Eric’s anniversary celebration after he’s paid $1 million by Sami (Alison Sweeney) to reveal the truth about his tryst with Nicole back in May. At first, Eric doesn’t believe him but Nicole eventually admits the truth to a stunned Eric who quickly leaves the family gathering and heads home. Following him out, Nicole lashes out at Sami, promising to get back at her. Meanwhile, Xander gets the ax from Brady (Eric Martsolf). Picking up where things left off, on Tuesday, July 20, Nicole and Eric have an emotional confrontation about their marriage.

“There’s a lot happening emotionally between the two of them,” says Zucker in an interview published in the latest issue of Soap Opera Digest, on newsstands now. “The fact that he kept staying away in Africa and doing the work that he loves so much is a strain on the relationship. So even though she didn’t do the best thing ever, neither did he, as newlyweds. There’s just  a lot of conflict in her heart.” She adds,” I don’t think that what Nicole signed up for, being estranged from her husband and him being so far away and having to try to handle the lack of love and support from him not physically being there.”

As for Eric making the decision to leave Salem in order to head back to Africa, Zucker notes Nicole “already knows he’s leaving and walking out. It’s not so much about making him stay as much as it’s trying to communicate with him and then see where it goes after, which is ultimately him leaving.”

With nothing to lose, Nicole seeks revenge against Sami and she’ll be able to put a plan in motion thanks to the unlikeliest of people. On Thursday, July 22, Philip (Jay Kenneth Johnson) takes matters into his own hands to help his brother, presenting Nicole with proof of Sami’s own tryst with Lucas (Bryan Datillo) while still married to EJ (Dan Feuerriegel).

Watch out, Sami. There’s nothing like a woman scorned!