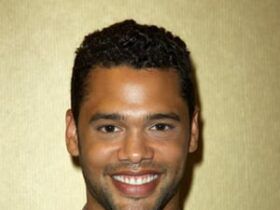 ESPN host Stephen A. Smith is returning to “General Hospital.” Smith, who last appeared on the ABC soap in 2007 as a reporter, will appear on the Wednesday, March 30 episode in scenes opposite Maurice Benard (Sonny).

Smith is a devout fan of “GH,” who often talks about his love for the ABC soap. And one of his favorite characters is mobster Sonny Corinthos, who, of course, is played by Benard. Lucky for Smith, that’s who he got to work with, as he’s  cast as an IT expert  and mob henchman hired by Sonny.

“I had an absolute blast on ‘GH,’” said Smith, after taping. “The cast members could not have been more warm and welcoming. I was amazed not only by their talent, but their commitment and hard work. As a fan of the show for 40 years, it was just a thrill. I still have goose bumps.”

Benard was quick to praise his new co-star’s work on Twitter: “I had the best time working with @stephenasmith today. He’s truly a natural. Not Denzel yet, but getting there.”

The “GH” actor also shared a backstage video of himself with Smith in which they had the following exchange:

“Stephen A, how excited are you?” asked Benard.

“You’re not going to disappoint,” Benard responded. “You’re going to be the greatest. I guarantee you that. I love you, man.”

I had the best time working with @stephenasmith today. He’s truly a natural. Not Denzel yet, but getting there. pic.twitter.com/D7tbcLUgrp

Smith, who taped his scenes on March 7, ran into Laura Wright (Carly) behind the scenes and was thrilled to have a picture taken with her, which he shared on Twitter. “Damn, I’m a lucky man. On the set of @General Hospital right now and look who decided to take a pic with Me? #Haaaaa!!!!” he posted.

Damn, I’m a lucky man. On the set of @GeneralHospital right now and look who decided to take a pic with Me?#Haaaaa!! pic.twitter.com/YP1mrjkiXd

“GH” newcomer Matt Cohen (Griffin) shared a Twitter pic of himself with Smith, too. Apparently, the pair had a chat about sports, because Smith later posted, “This man knows his boxing.”

Be sure not to miss Smith’s GH appearance on March 30.