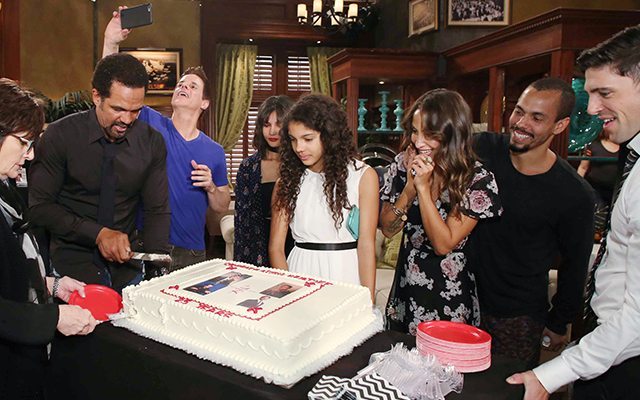 Kristoff St. John (Neil Winters) has reached a milestone — his 25th year anniversary on “The Young and the Restless.” In honor of the special occasion, a gathering was held on the show’s CBS sound stage, last Friday. Cast, crew, “Y&R” co-creator Lee Phillip Bell and the actor’s daughters, Paris and Lola, were all on hand to celebrate the talented actor.

Cast members took turns speaking about St. John, as he listened off to the side. Among them: Christel Khalil (Lily) and Bryton James (Devon), who play his onscreen children.

“You are like my second dad here. I truly love you,” said James.

“You’re such an amazing actor, and you’re so connected. Thank you,” added Khalil.

“Y&R” patriarch Eric Braeden (Victor) heaped praise on the man of the hour, too. “You are always a joy to watch. To do scenes with you is always a pleasure, because you’re so damn real,” noted Braeden. “I consider you a friend. I trust you.”

When it was time for St. John to take the mike, he was humble, thanking everyone who helped him during his early years on the soap. “I was taken under the wing of a lot of people here,” recounted St. John. “And it wasn’t just the actors. It was people behind the scenes.”

Eventually, it was time to eat cake, and it was quite an elaborate concoction, displaying four photos of St. John through the years. On it were the words, “Congratulation Kristoff, 25 years.”

St. John posed for pictures with his co-stars and took a special photo with all four of his kids: real life daughters, Paris and Lola, and onscreen kids, Khalil and James.

Before the party wrapped, St. John taped a special message for his fans.

Check out St. John’s message to you here:

The 25th anniversary festivities have come 2 an end! Here’s a special message from @kristoffstjohn1 2 u #YR fans! pic.twitter.com/kxmBjO6fHt