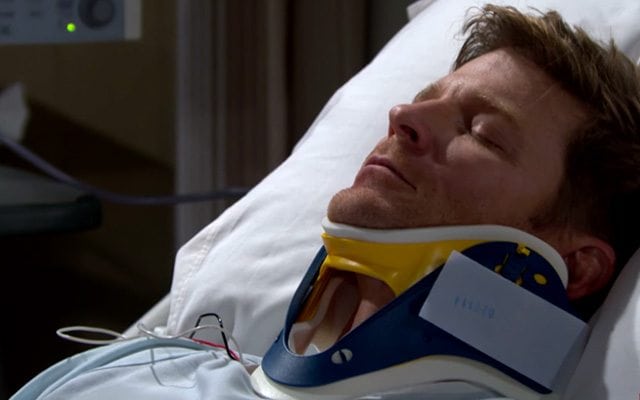 When Jason Thompson takes over the role of Billy Abbott beginning Wednesday, January 13 on CBS’ “The Young and the Restless,” it’ll be during an emotional time for the character as his doctors conclude he has a slim chance of survival shortly after not just one, but two misadventures that have left him in a coma and possibly paralyzed.

First Billy (currently portrayed by Burgess Jenkinson) was beat up in the Newman parking garage after failing to pay his bookie the money he owed just as the clock struck midnight in Genoa City, and then Noah Newman (Robert Adamson) ran over Billy after placing his car in reverse soon after Sharon (Sharon Case) and Nicholas’ (Joshua Morrow) son had another disagreement with Marissa (Sofia Pernas), who found Billy lying unconscious after Noah drove off in his car.

While any logical driver would likely check on their car after realizing that they may have hit something (besides the wall) when backing up in order to avoid another vehicle parked in front of them, Noah’s decision to push forward will definitely put not just a damper on his relationship with Marissa, who is called into the precinct to give a statement to Paul Williams (Doug Davidson), but more severely his freedom as well.

With machines the only thing keeping him alive at the moment, Billy’s family and friends hope their love, support and prayers can bring him back to them. But which Billy will be greeting them when he wakes up? You’ll just have to tune in to find out!

Watch this week’s promo below:

In case you missed what happened on the final episode of “Y&R” of 2015, watch the clip below: