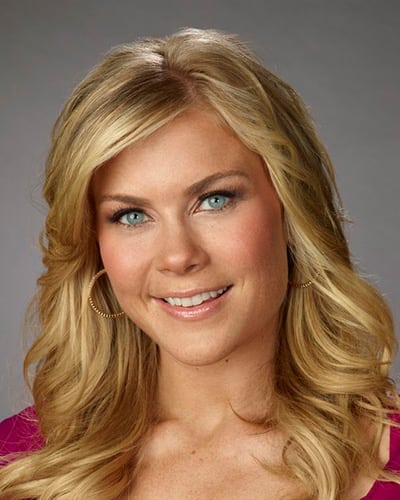 After 21 years portraying Sami Brady on NBC’s “Days of our Lives,” you’d think Alison Sweeney would have forgotten some of her characters’ storyline plot points, but you’d be wrong. Appearing on the Wednesday, October 1 episode of “The Ellen DeGeneres Show,” as part of its Breast Cancer Awareness Month day one episode, Sweeney took part in the segment “30 Seconds or Else,” only she didn’t exactly know what the “else” was (presumably water).

With $1,000 donated to breast cancer research for every question she answered correctly with only 30 seconds on the clock and a total of ten questions relating to her character on “DAYS,” Sweeney remembered that Sami’s twin is Eric (Greg Vaughan), the name’s of all of Sami’s children and their fathers (Will and Allie = Lucas; Johnny and Sydney = EJ), what Sami tried to do after her baby sister Belle was born (she tried to sell her), Sami’s first job (Candy striper), the name of the man Sami pretended to be for several months (Stan), and finally, who Sami ended up shooting in the groin (Alan, the one who raped her).

With only six questions asked and answered correctly, unfortunately for Sweeney, the clock ran out and she got a bucket of flour poured over her head followed by a bucket of water thrown at her as if she was being made into a live dumpling. Despite “losing” the game, host Ellen DeGeneres announced that since the actress was such a good sport the show would donate $10,000 towards breast cancer research anyway.

WATCH: Sam Sees Jason on ‘General Hospital,’ or Does She? Billy Miller’s Debut!

Comings & Goings, Days of our Lives

Alison Sweeney Back to ‘DAYS’