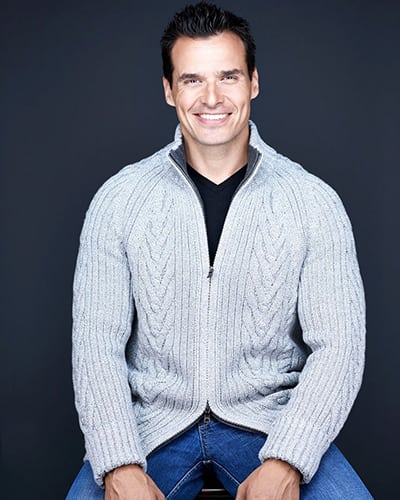 Antonio Sabato Jr. (ex-Dante Damiano, “The Bold and the Beautiful;” ex-Jagger Cates, “General Hospital”) has just recently been announced as a contestant on the 19th season of ABC’s “Dancing With the Stars,” but that’s not all that’s been keeping the former “Melrose Place” actor busy: He also has a brand new syndicated home improvement show debuting next week!

Called “Fix It & Finish It,“ the series follows Sabato as he and a team of contractors swoop into homes across America and completely re-do particular spaces. “It’s a whole new ride,” the actor shares with Soap Opera Network of trading in acting for home construction, at least for the time being. “We’ve been on the road since May, and it is amazing, what we’ve seen, what we’ve been through, just helping beautiful people through all of these beautiful projects. So far, it’s been an incredible blessing.”

Now, with “Dancing” also on his shoulders, the actor is in for quite a busy year ahead. He and his “Fix It & Finish It” team will continue on the road doing home improvement projects through April. “I don’t have a break!” he says with a laugh. “I literally am working and doing these shows, and once I’m off, I fly back home to see my wife and my kids. So except for Thanksgiving and Christmas, we’re on the road to keep blessing people every day.”

Many fans might be surprised that Sabato — who’s known for modeling and acting — is not only doing home improvement work, but also getting down and dirty in the messy projects on a daily basis. But the actor himself looks at it as the next logical step in his long career. “It’s something that I believe happened for a reason,” he explains. “It started with a renovation type of show, a designing show, that needed a host… and we weren’t sure if the show was going to [get picked up] this year, and me and my executive producer, Scott Sternberg, met to do other projects, and we were going to do a car and motorcycle kind of thing, stuff with my racing cars and building motorcycles. And then he just told me out of the blue, he said, ‘What do you think about doing a designing show?’”

The actor was slightly hesitant at first, considering he doesn’t have any formal home construction or design experience, but it was a proposition he couldn’t turn down. “I designed my homes, and I really like doing that kind of work for my family and my wife, but I’d never thought about doing anything like that for everyone to see,” he reveals. “And then a few days went by, and Scott said, ‘You know what, we might have something here. There’s a show that didn’t go, and they kind of want to think about you doing it,’ so we met, and it all clicked, and we all fell in love with each other and said, ‘Let’s do this.’ And we’ve been on the road since May.”

Sabato and his team — which is made up of local contractors, builders, landscapers, etc. — are doing 150 homes across the country, and each show is done on a daily basis. “Every day, we show up and change somebody’s life, and there’s nothing better than giving back to the people,” the actor says. “I show up in the morning, and I do the ambush, as we call it, and we start the work. And you know, these are projects that would take days, if not weeks, if not a month, to do. And we’re doing it in one day. Most of these people could never afford or have the time to do stuff like this, so literally, we’re just changing their lives. There are things that mean so much to them, that they’ve been waiting for. For example, I met a single dad yesterday. We re-did his backyard, and he’s been waiting since his kids were born to do something like this for them, so it’s really, really special. And we’re not even half way. We’re just in the 40s and we’ve got to get to 150 shows.”

Not only does “Fix It & Finish It” bring happiness to families, Sabato explains that it’s also good for local communities, since each episode uses a local crew. “Not only with this are we helping the families, the people that own these homes, but we’re also helping the community come together and sell their products and what they do,” he explains. “So that means a lot to me, because these guys are working so hard. We’re there working 12 to 16 hour days and everybody has got a smile on their face. I start the day with a prayer every morning, and I just want everybody to feel good about this. It’s a good feeling show, it’s an educational show, it’s a renovation show, and it’s a happy show. I’ve seen people cry, they call me amazing names, they’ve hugged me. I see it every day, and what’s better than that?”

Catch “Fix It & Finish It” when the series debuts nationwide in a syndicated format on Monday, September 8.