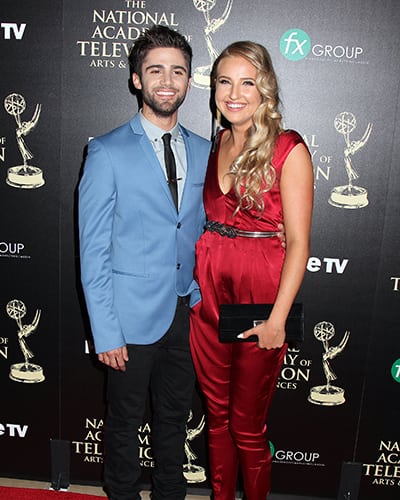 “The Young and the Restless'” Max Ehrich (Fenmore Baldwin) — seen here with his girlfriend, actress Veronica Dunne — is usually quite stylish on the red carpet, and it was no exception for the 41st Annual Daytime Emmy Awards, where he was nominated as Outstanding Younger Actor.

Soap Opera Network: Wow, look at you with that facial hair! You look fabulous!

Ehrich: Thank you. I’m growing it out for “Under the Dome,” the CBS show. They had me grow it out, and I’m so used to Fenmore being really clean shaven. But there’s something about having some sort of difference, whether it’s in your hair or your face, that allows you to believe that you’re someone else.

That makes sense. Your outfit is super stylish, as usual. Who are you wearing?

Top Man from Top Shop. It just fits really well. You don’t have to do any alterations. I went there yesterday, and I was like, “I want that!”

Just yesterday? So funny how guys are able to do it like that! Your girlfriend looks gorgeous, as well. Did you do anything to help her get ready?

Well, I brought a steamer!

Ha, that’s hilarious. But I guess every little bit counts! Do you have any good luck charms tonight?

Aw, that’s so sweet! So what did you guys do today leading up to the red carpet?

Well I really can’t: I have a flight in the morning. I go back to North Carolina to do “Under the Dome.”

Yeah. I didn’t choose that though! But this morning, I did some yoga, then I went to my friend’s place in Santa Monica so she could do my hair, and then I had some Earth Bar — a chocolate smoothie. Because you need some chocolate before! You can’t function without chocolate.

That’s stating the obvious, Max! Who, besides yourself of course, do you think deserves to take home an Emmy tonight?

Honestly, every single person in the categories. But I’m definitely rooting for Christian Le Blanc (Michael Baldwin). Getting to work with him has been transforming for me. It was my first time doing a soap opera, so I feel like he really took me under his wing and taught me a lot.