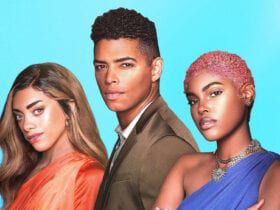 Vincent Irizarry debuts as Deimos Kiriakis and Brandon Beemer returns to ‘Days of our Lives’ as Shawn Douglas Brady, this week. Look for both actors and their characters to hit the ground running upon arriving in Salem.

Irizarry’s Deimos shows up at the Kiriakis mansion to reconnect with his big brother Victor (John Aniston) on Monday, January 18. For Victor, it’s like the past coming back to haunt him. Suffice it to say the two brothers are not close. As the story unfolds, viewers will find out why and that what went on between the siblings has left Deimos consumed with revenge — and it’s kind of with just cause. He’s evil to the max. Victor will first confide in Maggie (Suzanne Rogers) about his twisted history with Deimos.

Meanwhile, Beemer replaces Jason Cook, who briefly returned as Bo and Hope’s son in October 2015 for a six week stint, on Tuesday, January 19. It’s not the first time Beemer has stepped in for Cook. When Cook left Days after his initial run on the show from 1999 to 2006, Beemer took over the role. He left the soap in 2008, when Shawn and Belle (Martha Madison) were written off into the sunset together.

This time around, as viewers have already learned, Shawn and Belle’s marriage has imploded courtesy of Belle’s infidelity. Nevertheless, Shawn is back to try to make things work between them, after being summoned back to Salem by their daughter Claire (Olivia Rose Keegan).

Unfortunately, Shawn’s timing couldn’t be worse. He phones Belle and tells her he wants to reconcile and give their marriage another go. Little does he know she takes his call while she’s in Las Vegas, where she’s just bedded Philip (John-Paul Lavoisier).