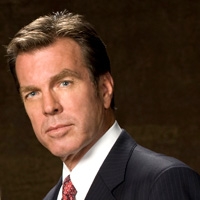 Chloe's win was bittersweet when she headed back to the Chancellor mansion with Esther and Delia. Esther gave Chloe some time alone to gather her thoughts. While sitting in the living room, Katherine entered and started to talk to Chloe about the custody case. Katherine pointed out that Chloe went for the jugular against Billy due to her own past of not having a father in her life. Chloe didn't want to hear what Katherine had to say, but Katherine was relentless. She wanted to know if Chloe was planning to eliminate Billy from Delia's life for good. Chloe admitted to her that she was going to drop the whole custody case until she discovered that Billy had resorted back to his old habits; drinking and his arrest from the night before. Katherine couldn't believe that Billy had taken a turn. Katherine realized that Chloe was genuinely worried about Billy, but Chloe sniffed that her priority was to care for Delia. When Esther returned with Delia, she started to aske about her father. Chloe lied and said that she wouldn't be able to see him because he wasn't feeling too good.

Billy arrived to see Victoria. He told her that lost the case and that he had very restricted visitations with her. She offered up sympathy but asked him if he thought he had a chance even after being arrested for solicitation. Billy was shocked that she was aware of his arrest but assured her that he didn't propsition the woman; that the officer assumed he was because he handed the woman cab fare. Victoria told him that she believed him. While Victoria was offering her support, she admitted that it was hard to see him slowly ruining his life. Billy told his wife that she should have better and she agreed. She mused that she thought they would be the one Abbott/Newman relationship that would last. Billy told her that they could if she gave him a chance to make it work. Victoria said he had a lot to prove to make that happen.

At the hospital, Tucker complimented on how good Ashley looked tonight. She wanted to keep him company. He asked if all was okay and wondered if Abby was taking the news of their marriage hard. Ashley told him that Abby wasn't aware. He offered for them to share the news together after he was released. The topic of her taking over for him once again came up and he wanted her to say yes. Ashley said that if he hadn't been in his accident, they wouldn't be worried on running his company. She said that Jack was the right fit to get things back on track but he was leery of the idea. She reassured him to give Jack a chance. Tucker soon decided that he wanted to attend the Jabot Launch party with him. Ashley however, wanted him to rest.

Lauren and Jack were seeing on the final details of the Jabot Launch party when Jill showed up, preoccupied. Lauren asked Jack to see how Jill was doing while she handled things with the press. Jack learned from Jill about Billy losing custody of Delia, as well as his arrest for solicitation. Jack wanted the lauch party to soliidfy that the Abbott family was back, but was disappointed that none of the family would be there. Meanwhile, at Gloworm, Abby ran into George an Shiva, who wanted to know if she was going to the launch party. When she said no, they told her about a "Where Are They Now?" blurb, which prompted her to go. When she got to the party, she assured Jack she would be on her best behavior.

Things were going well at the Jabot Launch party. George an Shiva commented to Lauren that the new Jabot cosmetics line was going to be the sure thing that everyone would want to have. Meanwhile, Jill was handling press, and Abby dodged questions about rehab and the whereabouts of Ashley. When Shiva and George were heading out, they offered for Abby to join them but she said she was going to be there to support her family. Meanwhile, Katherine made her way into the event and talked to Jill briefly about Billy.

Still worried that Ashley was a no-show, Jack had but no choice but to have Lauren take her place when they made their announcement of the new line. Lauren announced Jack as CEO of Jabot. Sofia soon arrived, excited to see what was going on at the launch. As all listened to Jack talk on the future of Jabot and the new line. Jack was ready to have Katherine say a few words, but her moment was stolen when Tucker and Ashley arrived, obivously ready to steal the scene, leaving Jill, Katherine and Jack all dumbfounded.