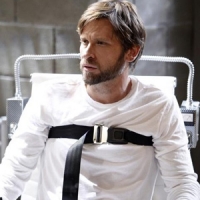 After John expresses concern that someone has messed with the papers on his desk, John and Natalie go over new evidence. When the DNA analysis of the hair Natalie found comes back as Todd’s, they wonder what it means. John’s informant line rings with an intriguing call from the man with Todd’s original face who id’s himself only as the super hero. John goes to meet him.

Brody tries strong-arming Vimal into promising to keep the secret about Liam. When that doesn’t work, Brody pleads on an emotional level, which Vimal understands. Vimal, however, is noncommittal. He promises only to think about it. Brody returns to Natalie who asks if he tampered with anything on John’s desk. Brody lies, says he didn’t, but he is clearly troubled – and worried Vimal might tell the truth about Liam.

Todd and Blair fete Sam with a day of his own in which they have to do whatever he wants them to do. He gets his dad riled up when he talks glowingly of the man with Todd’s original face. While everyone gets ready for Sam’s special lunch at the Buenos Dias Cafe, Todd probes about the man with Todd’s original face, but Sam has few answers. Starr overhears Todd swearing to Sam that no matter what happens, Todd loves him. Starr asks him about it and about the man Sam claims has Dad’s old face. Todd’s evasive, telling her how much he loves her.

Todd tells the family to go to lunch without him. Todd meets with Baker, demanding to know who the man with Todd’s original face is. Téa witnesses more tension between Baz and Tomas. Tomas abruptly leaves. Tea questions Baz who throws it back at her, asking about Tomas and Todd.

Meanwhile, Tomas meets with Baker and we learn more about their relationship. Téa vows to toss Tomas out of the house unless he tells her what he’s hiding. Starr got the sense that her father was afraid of something.

Rex warns Dorian that if she doesn’t drop the charges against Echo, Rex will get Clint to press charges against Dorian for attempted murder. Dorian’s troubled by the new, ruthless Rex.

Rex seethes when he encounters Jack and his family celebrating Sam’s big rescue of Dorian.