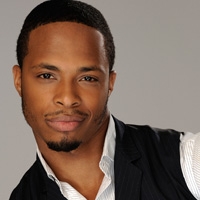 Maya gasps when she holds Lucy and Frankie asks if she’s ok and Maya explains she had the same feeling when she held her baby. Jesse questions Frankie if she can do the job and Maya assures Frankie she’ll be good with Lucy. When she holds Lucy again Maya’s much more comfortable and remembers the night she held her baby. Jesse notices her kiss Lucy on the forehead and is a little unsettled at the closeness he’s just witnessed.

Having accepted David’s proposal Jane tells Bianca and Kendall she doesn’t want to choose between them and David. Both girls agree they need to get their mother away from David. Jane’s excited about planning the wedding but David says they that cannot make it a big extravaganza. Kendall tells Griffin she’s in the middle of something that he might now want to be a part of and he promises to look into what David is doing with Erica. After leaving, Griffin calls David and demands to know why he’s marrying Erica. Erica asks Ben what the noise on the other side of the wall and he says it’s a heater. She asks him to end this now and just as he’s about to set her free, Jane arrives. Jane says she cannot give up being Erica since she is about to marry David. Jane admits she doesn’t know what to do with Erica yet. Jane is deeply affected when she listens to Erica’s memoir.

Marissa tells Krystal she’s in love and explains how unexpected it is. Krystal’s moved to tears over her daughter’s strong feelings and assumes it’s with Bianca. She immediately hugs Marissa and accepts her choice right off the bat. Marissa confesses she is comfortable with herself for the first time in a long time. Krystal can tell she really loves Bianca. Bianca finds Marissa at Krystal’s and admits her mom isn’t doing well but believes she’ll be ok because she has Marissa in her life. Krystal gives Bianca a hug and says she wants her daughter to be happy and in love and Bianca brings her both.