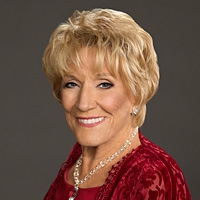 Sam and Sharon were able to find Fanny and bring her back to the barn. Piper was happy that she was back and asked if she could stay with Sharon for the night. Sharon initially declined but when Sam returned and told Piper that he called her family to ask if it would be alright for her to stay there till the storm passed, she was excited. As Sharon and Piper bunked together in the barn, Sharon asked for Sam to stay with them. He said he would until they drifted off to sleep. Sharon kindly expressed how she liked being around him.

Traci arrived at the hospital to see how everyone was doing. She brought clothes for Abby to wear back home once she was released from the hospital. When she entered the room to see her niece, she broke down in a flood of tears, remembering her last time with Colleen. Abby quickly gave her a hug to soothe her and Traci excused herself. Seconds after Traci left, Detective Mauro entered and started to pump Abby for answers about the condition of Tucker and Ashley's relationship at the time of the rehearsal dinner. Abby quickly deduced that she was trying to place the accident solely on Ashley's shoulders. She told the detective that everyone was happy about getting married, but it was she that didn't want them to be together. When Det. Mauro asked about the trashing of the wedding site, Abby said that it only brought her mother and Tucker closer, even being on the same side of being fed up with Abby's actions. Ashley walked in just in time to hear Abby admit that she was the one that set up Tucker and Diane to meet each other at the cabin. She immediately halted the interrogation and told Abby to keep her mouth shut.

Diane cooked soup for Adam and thanked him for letting her stay there. Adam liked the fact that he had her around and couldn't wait to see the look on Victor's face when he learned that she was staying there. Diane decided on taking a run on the grounds, while Adam enjoyed her cooking. When she returned she asked Adam if it would be fine with him to have Kyle come to the house. He agreed to let him stay there as long as he didn't give him any problems. Before they could continue their conversation, though, there was a knock on the door. Diane opened it up to see Victor, who wanted to know what she was doing there. Adam told him that she was his new roommate. Victor threw out how Diane was nothing more than a user, sleeping her way around. He goes on by naming himself, Nick, and Jack as her conquests. Diane balked and told her ex that she and Adam were nothing but roommates, but Adam, however, had fun making Victor believe they were hitting the sheets, too. Victor warned him that he wasn't going to let them play him and walked off.

Sofia visited Tucker's room and saw Katherine there by his bedside. She was stunned to see him back on a ventilator and Katherine explained that due to the loophole, he could have a feeding tube. Sofia showed her gratitude to Katherine by giving her a hug. The two started to talk on how Sofia and Tucker first got to know one another. She shared how her father and he were friends and when he died, Tucker cared for her as his own.

Jack told Traci that with Tucker lapsed in a coma and with Ashley not at her best, they seriously needed to find out the status of Jabot. Traci snapped and told him that his family was more important than his obsession with the company. Jack told her that he does care about the family but he does know that they can't let their family legacy fall apart. Unfortunately for Jack, his words fell on deaf ears when an upset Traci walked out on him. Not giving up on what he wanted, he spotted Katherine and asked on Tucker's condition. She is touched that he is concerned but that those feelings changed when he started to question her about who was going to oversee Jabot. Katherine told him that it wasn't the time to be putting business on the table; her son was her first and only priority.

Abby told Ashley that she was sorry for what she did; she never meant to cause her any pain, but she wanted to prove to her that Tucker couldn't be trusted, especially if he did go to Diane. Ashley was angry that her daughter would do so much to cause her pain and make her doubt the love that Tucker had for her. She left her daughter to go see Tucker. She quietly told him that she had to do whatever she could to keep Abby out of trouble for hitting him.

Victor showed up at the hospital to see about Ashley and Abby when he ran into Jack. Jack filled him on on how they were doing; as well as Katherine and Tucker. He then started to talk to Victor about how Tucker's company and Jabot would need to have someone overseeing them. Jack was insulted though when Victor smugly pointed out that with Tucker in a coma, Jabot could be the company that suffers. When Traci returned, he vented about his conversation with Victor. Annoyed once again, Traci told Jack that he'd choose Jabot over his family if he had the chance. Before they could get into it, Abby showed up and told Jack and Traci about what she did. When Victor showed up, he wanted to know what was going on; but Jack stopped her from talking by telling him she was just overtired. Alone with his daughter, he offered for her to stay with him, but she declined saying she needed to be with her mother. When Victor left, he received a call telling him that the order went through to keep Adam and Diane from being able to enter the house.

Katherine returned to Tucker's room, shortly followed by Sofia and Tucker's lawyer. He shared that there were other portions of the will that they needed to discuss. The lawyer told them that in the event that something were to happen to Tucker, Katherine would be the sole controller of all of his businesses. They were shocked however, when they learned that 20 million dollars was set aside in the event that the son he was searching for comes to light.

Jack tried to talk Ashley into giving him the reigns of Jabot. Unfortunately for him and her, their conversation is interrupted when Detective Mauro showed up with a police officer to arrest Ashley.