Home / News / Protest or Shut Up: The Time is Now for Soap Fans to Be Heard 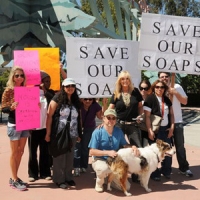 (SoapOperaNetwork.com) — Pardon me soap fans for being harsh, but It has now been more than a month since ABC canceled "All My Children" and "One Life to Live." It has been nearly two weeks since reports surfaced that "General Hospital" might be in danger of cancellation as well. Since the news broke on that awful Thursday afternoon, message boards and websites all around the world have been flooded with your comments. A failed protest on Tuesday, April 26 in New York City included police presence, but the Los Angeles protest outside of Disney's Burbank headquarters was a joke. Did you see the picture (it's the one on the right)? The LA protest was also attended by former "One Life to Live" star Catherine Hickland (ex-Lindsay Rappaport), who is the blonde pictured in the middle. I mean seriously people! If you have any desire to Save Your Soaps, the time is now for you to do something about it or shut the hell up and accept that the end is near.

On Tuesday, May 17, soap fans in and around New York City are asked to join former Soap Opera Weekly founding editor in chief, Mimi Torchin, and former "As The World Turns" actress, Colleen Zenk (ex-Barbara Ryan), as the two are expected to join protesters across the street from Lincoln Center beginning at 2:00 PM ET and ending at 6:00 PM ET. The decision to protest outside of Lincoln Center on that particular day is due to ABC's Presentation of its 2011-2012 daytime and primetime schedule to the press and advertisers during Upfront week, which begins Monday, May 16 with NBC and FOX. Agencies representing major auto-makers, movie studios (including ABC parent, Disney), pharmaceutical companies, the electronics industry and more are expected to be in attendance as the network fights to get a piece of the $9.2 billion pie up for grabs between competitors CBS, FOX, NBC and The CW. Also fighting for ad dollars is Univision and Telemundo, two spanish speaking television networks dominated with telenovelas (in the US, that means soap operas).

In a statement supporting the protest, Zenk said "as a member of the cast of 'As The World Turns,' I know all too well the anger of the fans and the dismay of all who work in our Daytime world. This is devastating for the acting community and all supporting fields in New York. We are all being affected by these cancellations. This will hit the Broadway community immensely."

TV Guide Canada's Nelson Branco spoke with Lowell Peterson, Executive Director of the Writer's Guild of America – East, who agreed to pass on protest information to WGA members interested in attending, in the latest edition of his weekly Suds Report column. According to Lowell, "it's still important to maintain this genre. It's broken a lot of new ground in terms of subject matter, which were once considered taboo or delicate. In addition to providing work for our members, the genre has provided enlightenment. [Soaps] have been a tremendous positive force so it's a shame to see them being canceled."

To join what is expected to be a quiet and respectful protest, make sure to put 132 W. 65th St. & Columbus Ave in your iPhone, iPad, iPod or Android supported device or even search Mapquest or Google Maps for directions. Or, you can always just pull out your trusty old Rand McNally foldout paper road map. If that doesn't work, you could just stop and ask someone for directions along the way.