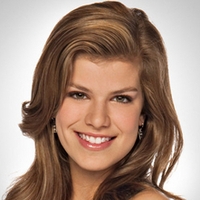 Nate overhears Destiny admitting to Danielle (who has pieced it together herself) that Matthew killed Eddie Ford. Nate storms off, leaving Danielle and Destiny none the wiser that he was ever there, much less a witness to their conversation. Elsewhere, Matthew decides that he must turn himself in for the crime, especially now that Blanca appears to be on the verge of announcing it during her show. Nora won’t stand for this and begs Bo to step in. Bo and Nora leave to try to prevent Blanca from going public.

Nate arrives after their exit and confronts Matthew. Matthew confesses that he killed Eddie but elaborates on the circumstances. Nate rips into Matthew for allowing him to take the fall.

At the hospital, Blanca asks Clint for a comment on her exclusive: That Matthew killed Eddie Ford, and Bo and Nora covered it up. Clint won’t stand for this and makes a deal with Blanca.

Rick learns about the reward Clint is offering for information leading to the safe return of Liam. Meanwhile, Wes is reuniting with Marty, who realizes Jessica’s break from reality has worsened. At the hospital, John is dismayed to learn of Clint’s offer of a reward, fearing that it will distract from his search for Marty.

Brody gives Viki and Natalie the news that they found Marty’s psychiatrist dead, likely at Marty’s hands. The trio piece together Natalie’s movements leading up to her arrival at the Angel Square Hotel and theorize that the tape of Marty’s therapy session (previously in Natalie’s hands but now mysteriously missing) may have played a role in her confrontation with her enemy. None has any idea of what is on the tape, which we see is still lying around Angel Square, itching to be found.

Rick crosses with John at the hospital and offers to give up his information on Marty’s whereabouts, but only in exchange for Clint’s reward money. Rick has picked the wrong cop to screw around with and eventually capitulates to John. John and Brody race off in search of Marty and Liam.

Destiny begs Danielle not to divulge what she’s learned about Matthew. Danielle points out that Destiny’s request may be moot, as Blanca appears verged to broadcast Matthew’s guilt herself. Nate – having knocked Matthew flat – warns him to turn himself in, or else. Bo and Nora burst in on Blanca’s live interview with Clint, and are stunned to hear him claim responsibility for Eddie’s murder.

Thanks to Marty, Wes appears to be turning into Jess. Viki and Natalie keep vigil for Liam.