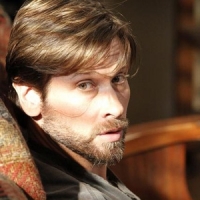 (SoapOperaNetwork.com) — If you've been living under a rock, you may not have known that Roger Howarth was returning to ABC's "One Life to Live" beginning Friday, May 13. The only question was whether or not he'd be playing the role of Todd Manning or some new character that just happens to look like Todd pre-2003, when Trevor St. John took over the role after it was revealed his initial role as Walker Laurence was really Todd with a face lift. In "The Tale of Two Todd's," Howarth marks his triumphant return to the drama series with the infamous scar and all, so what's the deal? Who is truly Todd?

Based on images released today by the network, it looks like St. John has in fact been portraying an impostor Todd, while Howarth's Todd looks to have been locked away in some sort of psyche ward for the past eight years.

According to ABC, Howarth began filming on Wednesday, May 4. "One Life to Live" Head Writer Ron Carlivati made the decision to quickly insert Howarth on the show shortly after the network canceled the long running soap opera citing poor financial returns from Madison Avenue.