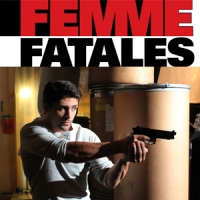 (SoapOperaNetwork.com) — "Days of our Lives" star Bren Foster (Quinn) will be guest-starring in the Friday, May 27 episode of the Cinemax original series "Femme Fatales," which tells the story of powerful, sexy and dangerous women.

Very much in the vein of “Twilight Zone” and “Tales from the Crypt,” each episode is introduced by a mysterious and enigmatic host Lilith, played by Tanit Phoenix, and features different casts and storylines, some of which are intertwined. In each of the 13 stand-alone episodes, women find extraordinary ways of coping with their problems, channeling their survival instincts and bringing out their inner guile. From the creators of Femme Fatales Magazine, the show is inspired by and styled in the tradition of pulp stories, film noir and graphic novels, and takes place in contemporary settings. The half-hour program features stories similar to such noir movies as "Bound," "Dead Calm" and "Red Rock West."

Foster's episode is entitled "Something Like Murder" and it was inspired by the classic film noirs Double Indemnity and Body Heat, and is about two women who conspire to murder ones older, dull, wealthy husband. But once they've collected the "ransom" for Charles' ill-fated return, the double-crosses begin. Foster will play the role of Charlie.

"Something Like Murder" is the third episode in the "Femme Fatales" series. He joins a number of soap stars set to guest-star in later episodes. "General Hospital's" Robert LaSardo (ex-Manny/Mateo) and "Guiding Light's" Scott Bailey (ex-Sandy) both appeared in the Friday, May 20 episode entitled "Bad Medicine."