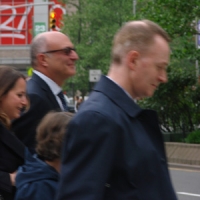 (SoapOperaNetwork.com) — Brian Frons, President, Daytime, Disney/ABC Television Group (pictured right wearing sun glasses), went into the ABC Upfront on Tuesday, May 17 knowing he was the most hated man in television today. Frons inherited the title from former NBC Universal CEO Jeff Zucker and all it took was a bunch of protesting fans to get the message across as they booed the executive while he walked across the street from Lincoln Center to an ABC After party at the Atlantic Grill restaurant. So how does the man that canceled a collective 83-years of daytime drama respond to angry fans? With a chuckle of course!

As the Soap Fans United protest was reaching its final half hour and industry movers and shakers made their way to various parties in and around New York City, daytime soap fans were surprised to see Frons walk right on by as they rallied on protesting the cancellation of their favorite soaps. This surprise appearance in front of fans would mark Frons' first public outing since the announcement that he decided to cancel "All My Children" and "One Life to Live" in favor of lower cost programming.

While the executive went to wine and dine with Disney/ABC collegues and advertisers, cast and crew at "One Life to Live" continued to film the soaps final months of storytelling a few blocks away.