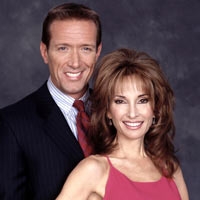 (SoapOperaNetwork.com) — A look at what’s happening on “All My Children” during the week of April 11, 2011.

Asher loses it when he sees a guy hitting on Colby. Maya convinces JR to give her a job. JR questions Asher’s connection to Maya. Maya tells Frankie her story on Tuesday, April 12. Angie encourages Jesse as he struggles to hold it together. JR give Marissa a meaningful gift. Marissa heads to St. Barts to personally deliver Bianca the news she’s been waiting for on Thursday, April 14. On Friday, April 15, Emma commiserates with Greenlee; unfortunately, it’s on the topic of having an evil step-mother. Amanda’s insecurities begin to rub off on Tad.

The Inside Story: Not So Lucky Number…?
On Monday, April 11, Jack & Erica dismiss the bad omens following them as their wedding day quickly approaches. Caleb is on a mission. Kendall encourages an unsure Erica to talk to Ricky. Erica deletes Caleb’s phone message. Krystal confesses her true feelings after Tad picks up on her disappointment about the impending nuptials. In St. Barts, Caleb manages to get Erica to himself and pours out his heart on Wednesday, April 13. Erica remembers times between her & Caleb and her & Jackson. Caleb waits at the airport for Erica’s decision. On Thursday, April 14, Erica is suddenly assailed as she appears ready to meet Jack at their wedding rehearsal. Jack, Kendall & Bianca search for Erica. Erica’s sudden disappearance prompts much speculation. Greenlee & Kendall get into it over the situation. Caleb insists to Jack that he doesn’t know where Erica is. Kendall ponders the possibility the casino owners went after her mother. Erica, meanwhile, demands her captor reveal his/her identity.

A Closer Look: Battle Scars
Griffin lashes out at Kendall. Ricky uses the situation to make ground. Iris blasts Jesse over coddling their murder suspect. Tad obliges when Griffin asks him to stop Cara from getting further involved in the dangerous situation he’s gotten himself into. Jack expresses his gratitude to Ricky for being there for his girls. Griffin worries that the casino associates will go after Kendall as he’s held without bail. Ricky tries to get Kendall’s mind off Griffin. On Wednesday, April 13, Jack realizes Ricky has feelings for Kendall. Ricky orders Griffin’s murder. Cara finds her bleeding brother. Despite Ricky’s insistence, Kendall continues to struggle with her doubts about Griffin’s guilt on Friday, April 15. Ricky tags along when Kendall decides to head back home after learning about the stabbing.