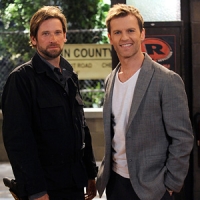 Todd attempts to secure a confession from Tomas on Monday, May 16. However, Tomas warns Todd that he knows what he’s been hiding. Téa is shocked when Todd claims he was wrong about her brother. Both Téa and Blair are puzzled by the sudden change in Todd’s story. Calmar advises Tomas that his fate is connected to Todd’s. Téa tells Tomas about Todd’s change of heart. Elsewhere in Llanview, Aubrey and Rama babysit Wes, while Cutter tries to lure out Tess, inviting him back to his motel room. Ford learns his ex-wife is now a man. Cristian and Rama have another encounter. Cutter goes to great lengths to get his wife back, only to have his plan backfire on him. Ford thinks he has come up with a plan to get custody of Ryder on Tuesday, May 17. Starr and James’ romantic evening is interrupted by Dani. Joey apologizes to Kelly. And on Friday, May 20, Joey and Aubrey each decide it’s time to clear the air.

The Inside Story: She’s Crazy Over You
With Liam in tow, Marty breezes by Destiny and Matthew on Monday, May 16. Brody comes to and is taken to the hospital. John questions Natalie about what happened. Brody and John decide to keep Natalie in the dark for now. Marty thinks nothing stands in the way of her being with John. On Wednesday, May 18, a gruesome discovery is made in Dr. Buhari’s office. Natalie realizes Liam is missing. After complaining to Marty about the noise, Rick helps soothes a fussy Liam. Later, he learns of a reward being offered for the baby’s return. Marty encounters Wes. On Thursday, May 19, Marty realizes that Jessica has completely lost touch with reality. John is angry over Clint’s actions. Brody, Viki, and Natalie try to figure out where Marty may have gone. Meanwhile, Marty’s therapy session tape is left in plain sight. Rick gets more than he bargained for. John and Brody search for Marty, who tries to talk some sense into Wes. Viki and Natalie pray for Liam. Wes covers for Marty.  Brody’s ploy to reach Jess brings out the wrong alter on Friday, May 20. Back in control, Tess can’t recall what happened. And Rex reaches out to his Natalie, while John is there for her as well.

A Closer Look: The Fall Guy(s)
Matthew asks Destiny why she has been pushing him away. Shaun nearly discovers that the teens had sex. Matthew tells Destiny that their night together was special to him. Meanwhile, Nate and Deanna get better acquainted, only to be interrupted by Dani on Monday, May 16. Nate and Dani continue to be at odds over Tomas. Bo and Nora confront Blanca, after she accuses her son of their murdering Eddie. Later, they tell Matthew of their encounter, and he makes a decision. Dani watches as Destiny and Matthew kiss. Destiny goes off on Blanca. Dani pieces together the truth. Destiny begs Dani to keep quiet, while Nate eavesdrops on their conversation. Bo and Nora work to keep Blanca from exposing their son. Nate vehemently attacks Matthew for letting him take the rap for something he did. In the heat of the moment, things quickly turn violent on Thursday, May 19. Bo and Nora are surprised to hear Clint taking responsibility for Eddie’s murder, among other things, during an interview with Blanca. Nora learns that Clint is dying. Rex is told of Clint’s confession. And Dorian informs Joey of his father’s admission on live TV.