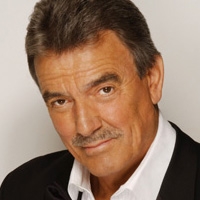 Victor arrives at the courthouse ready to take the stand to defend Sharon. Michael tries to advise him on how to handle Walsh's questions. Just then Billy and Nick show up and wonder if Victor's testimony will help Sharon.

Phyllis and Adam continue to hit a dead in when searching for the boy Koa gave the camera to. The two begin going to various street sellers asking if they received a camera to sell.

Daniel fills Lily in on his trip to Canada. She's stunned that he would let Daisy escape He tells her that with Daisy back in Genoa City, there would be nothing but problems for Billy and Victoria if she found out they had Lucy. After Daniel leaves, a young man comes up to Lily and talks fondly about his knowing Cane.

Jana continues to grill Primrose about who will have her 'baby'. Primrose continues to grow frustrated and wary of Jana. When the tables are turned and Primrose begins to ask Jana questions on the father of the baby, Jana pretends to have an attack. When Primrose leaves to find her something, Jana begins to snoop through Primrose's files. Before Jana can put the file back, Primrose returns and demands to know who she is. After a brief scuffle with one another, Primrose learns Jana isn't pregnant at all.

Neil pays Victoria, who is watching both Lucy and Faith, a visit. When the topic of Victor taking his company public comes up, Neil expresses how his leaving Newman Enterprises was the best thing for him. He advises Victoria to forget about getting Beauty of Nature and just distance herself from Victor's life. Victoria admits that she's not giving up on getting what she wants. Before leaving, Neil stresses to Victoria to focus on being the best mother Lucy can have.

On the witness stand, Victor gives his account of what he heard when he was around the volcano that fateful night in Hawaii. He states that Sharon was doing her best to save Skye's life and that she's too good of a person and mother to do something unthinkable. Walsh's attempts to get Victor to tell the truth about his involvement with Skye but Victor pleads the fifth. When Victor gets off the stand, Nick approaches him in the hallway, thanking him for doing the right thing. Once alone with Michael, Nick asks if Victor's testimony helped. Michael admits that it doesn't look good for Sharon.

Things continue to look bleak for Phyllis and Adam as they continue to search for the person that has the camera. Suddenly a young boy arrives and they manage to get the camera. Thinking that they have the proof to clear Sharon, they hit another dead end when they discover that the memory card is missing.