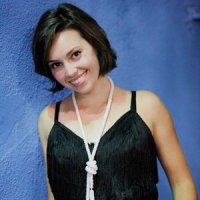 A frustrated Kevin continues to work at computer when Chloe comes in. She pretends to still be mad at him for helping Jana, which only irritates him more. When she tells him that she's on his side and doesn't understand why Daniel isn't glad that he's getting close to finding his daughter. Kevin tells Chloe that he could care less on Daniel's feelings, he's doing whatever until he gets to the truth. Meanwhile, a freaked Jana covers when Agnes asks if her baby is the same one she's watching. Rushing her out, Jana gleams at having the truth in her hands.

As Sharon and Sam bond over the fate of the sick lamb, at the church, Adam has made his presence known at the church. The pastor becomes a mediator and tells everyone to let him have his say. Adam tells them how Sharon made him changed man; but soon plays the blame game by telling everyone that it was them that pushed Sharon to her breaking point until it killed her. He soon starts to attack each individual, tossing out their dirty deeds in the church, causing Nikki to bolt and the rest to snap at him for his tirade. Having had enough, Victor faces him and demands that he get out.

Kevin calls Jana asking her if she can give the account number to him again. An over-excited Jana asks Kevin to come over because she wants to tell him something. He agrees and plans an 'act' with Chloe in an effort to get what he needs from Jana. After piecing together the shredding bank statement, Jana realizes that Billy bought Lucy from Primrose. She starts fantasizing about Kevin and her becoming the "new" parents of Lucy. Her fantasies are stopped when both Kevin and Chloe arrive. Chloe and Kevin fake a fight with one another, which only fuels Jana's delusions that Kevin is better off with her.

Adam is hauled away by DA Spencer and his police officers, who have returned. A skittish Phyllis pulls Jack away to leave the minute her eyes lock on Nick's. Diane also can't keep her eyes off of Nick and goes over to see how he is. He cooly tells her her place is with her husband. As everyone has exited, Billy and Daniel are the only two left. Daniel stresses that the two of them need to talk about baby. When Abby and Victoria return, Billy quickly states that the two men have business to discuss and they'll meet up at the reception. Once alone, Daniel tells a stunned Billy that he is Lucy's father.

Everyone heads to the memorial reception where they state that Sharon definitely is better off with Adam out of her life. In a area alone, Jack and Phyllis quietly talk. When he coyly comments how there was only one man that truly had Sharon's heart, Phyllis bristles. She soon realizes that Jack suspects something and says they need to find a place to talk. When she leaves for the ladies room, a nosey Diane probes into what is bothering him. He coldly tells her he has no plans on sharing anything with an ex. Diane realizes that Nick and Phyllis hooked up.

Jana is about to tell Kevin everything about Lucy being his niece when she's interrupted by Victoria's arrival. Meanwhile, back at the church, Daniel apologizes for keeping the truth from him. Billy thinks that Daniel is going to ask for Lucy back, but is relieved when Daniel tells him that he doesn't want to do that at all; he wants Victoria and Billy to continue raising the baby. Daniel continues to fill him in on Kevin and Jana trying to find the little girl and Billy states that they have no clue as to who has the baby. When Daniel shares that Kevin has been trying to hack into his bank account, a confident Billy tells him that he won't be able to and not to worry. Nobody is going to take Lucy away from them.

Back at Sam's farm, Sharon and he are glad to see that the little lamb is on the mend. She becomes overcome with happiness and starts to cry. Sam is surprised at her emotions and tells her that they saved the little lamb together.

Adam demands that Victor come see him at the police station. When he arrives, he snidely tells his father that he wants all of the charges dropped. Victor refuses to give him what he wants and is set to leave. He becomes interested, however, when Adam tells him that Sharon wrote several letters to the family before she died. Victor asks where he has the letters and Adam states that they are in a safe place. When his father demands that he hand them over, Adam in turn demands that he talk to Noah in dropping the charges against him.

At Jack's place, Jack forces Phyllis to admit that she slept with Nick. She tells him that she loves him and that she didn't mean to hurt him. A heartbroken Jack tells her that she never does. He says he doesn't know why she keeps sabotaging their relationship when he thinks things are going to get better between them. Phyllis admits her faults but wants them to work on the relationship. Jack, however, tells her that there's no more for them and that he wants her to leave.

At Billy and Victoria's, Jana heads upstairs and overhears Chloe and Kevin joking about how they fooled Jana into believing they truly were mad at one another. Sensing that she has come upstairs, the two quickly put on their squabble. Kevin head downstairs and asks Jana what it was she wanted to share with him. Upset with him, she quickly tells him that it was nothing important. When she heads upstairs, Daniel takes the opportunity to tell him that he'll help find the baby. Kevin is surprised. Upstairs, Jana lays in wait when Victoria and Billy leave from putting Lucy to bed. She scoops up Lucy and says that she's taking her away from there. When Delia walks in, she decides to take her too.