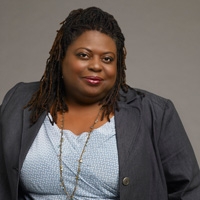 (SoapOperaNetwork.com) — It was only a matter of time before word broke that actors from "General Hospital" would begin receiving notice of their contract cycle not being renewed when the soap re-hired Rebecca Herbst (Elizabeth Webber) after firing her in late January citing "storyline dictated" reasons. The first cut is with actress Sonya Eddy, who has portrayed the role of Epiphany Johnson on both "GH" and short-lived spin-off "General Hospital: Night Shift" since 2006. The actress was upped to contract status in August 2007.

In a posting on her facebook page, Eddy answered the question that has been on the minds of her fans for quite awhile. "So, the question has been asked. Here's the answer…. It is true, I have been taken off contract at GH. And so it goes…," Eddy's post said. At this time it remains unclear  whether Eddy will remain on the soap in a recurring capacity.

An ABC representative was unavailable for comment at press time.