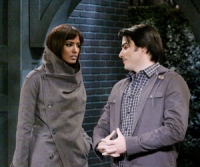 (SoapOperaNetwork.com) — One of “All My Children” semi-regular players is set to wrap up their stint in Pine Valley

Ella Thomas ends her run as the mobster associate and jealous gal pal of hit-man “Reverend” Ricky Torres (Eddie Matos), Diana Holden, on “All My Children” this April. The stunning Thomas debuted on the ABC soap on February 18 as one-half of the pair responsible for the murder of Kendall Hart Slater’s (Alicia Minshew) husband.

Thomas enjoyed a career as a successful model prior to catching the acting bug. Before getting the recurring role on “AMC”, Thomas had landed minor guest appearance spots on CBS’s “CSI: NY”, “CSI: Miami”, “How I Met Your Mother”, and “NCIS”, HBOs’ “Entourage”, NBC’s “Parenthood”, and ABC’s “Castle”.

Look for the circumstances of Diana’s exit to cause some serious ripple effects through the little town of Pine Valley. Thomas last airs on “AMC” on Friday, April 8.