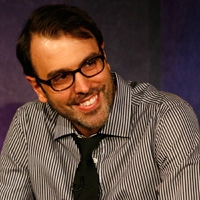 (SoapOperaNetwork.com) — On Sunday, March 13, Soap Opera Network chatted with some of your favorite actors from "All My Children, "One Life to Live" and "General Hospital" at a press party held at the Marriott Marquis Hotel in New York City. The event took place immediately following the 7th and final production of "ABC Daytime Salutes Broadway Cares/Equity Fights AIDS" charity event. In our first of a series of interviews, we thought it would be best to start things off by talking with "One Life to Live" head writer Ron Carlivati.

Carlivati came to "One Life to Live" as a writer's assistant in 1996. Since then he found himself taking on the positions of script writer and breakdown writer on one of daytime's longest running soap operas. But what is different from being a writer on the show to now being the head writer of said show? "Well suddenly it is all on my shoulders," said Carlivati. "I have to come up with who is going to do what to whom; this one is going to get pregnant; this one is going to shoot this one. I have to get it approved by the people above me, but it's really up to me to come up with the overall stories." As head writer, Carlivati works with a team of writers in scripting the daily escapades of Llanview's dynamic citizens. So how much influence could a writer have on changes in a storyline? "I have an amazing team that I work with and they have great ideas. I will change ideas in midstream because they have awesome ideas also," Carlivati shared.

Since taking over head writing duties in 2007, Carlivati and his team secured the soap its third Daytime Emmy Award for Outstanding Drama Series Writing Team in 2008 (previously "One Life" won in 1987 and 1994). So what's it like for the man knowing that he's in charge of spearheading the shows creative future? "It is an incredible responsibility," the writer said. "I take it very seriously. I love it. It is a great job. I'm actually the same age as the show [42 years], so I think that 'One Life to Live' and I are on parallel tracks. The show started in 1968 [July 15], and I was born in 1968. Here we are 42 years later and I've been writing on it for 15 years, so 1/3rd of the show I've been involved in."

Through out "One Life to Live's" more than forty years on the air, the show has had numerous special episodes to honor its history. From campy storylines in the episode "Trading Places" in the early 2000's, where Todd Manning (then played by Roger Howarth) dressed up as Viki Davidson (Erika Slezak), to as recent as last year's episodes where cast members (including Kristen Alderson) sang songs from the heart in a series of episodes dubbed "Starr X'd." Does Carlivati expect to continue the tradition? "We have a great one coming up that's to honor Erika Slezak [Viki] for her 40th anniversary on the show. She's basically the whole show and that's coming up in April. Her anniversary is actually in March, but the episode falls in April. It's going to be a fun day," the passionate writer said. "I love doing stuff like that. When we had the 10,000th episode or the 40th anniversary, it gives you the opportunity to really focus in and be like 'ok, this is really going to be a special show for the audience.'"

At the end of the day "One Life to Live" is written to provide entertainment to its millions of viewers, but how much influence does the audience have in the stories that are written? "I was a fan before I worked there. I like to think that because I am a fan that I sort of know what I would want to see. That feeds into what I do," said Carlivati. "I feel that I do have a huge amount of respect for our fans because we wouldn't have a show without them. It definitely influences what we do. I like to have a lot of those inside jokes, or little nods to the audience, to let them know that we do hear what they are saying."

In the last year alone sister soaps "All My Children" and "General Hospital" have gotten new opening sequences. Fans have long clamored for "One Life" to get a new opening as well. Does Carlivati see one in the shows future? "I don't know. That is Frank's [Valentini, Executive Producer] doing. I'm sure I would be told if it happens, but I don't know anything about it," he said.

Speaking of openings, in the past the show had started with episodes displaying a title card. Now they are no where to be seen. So what happened? "We did it for a long time. It was actually Frank's idea," said Carlivati. "We used to title the episodes before they were seen on the air. We would just title them for ourselves and Frank had the idea to start putting them on the screen. We did it for a couple of years and I loved it. I actually miss it because now when we're writing I'm like 'oh, I know what a great title that would be for that.'" The concept really did give the show more of a primetime feeling… "I think that was the intent. I'm not sure exactly why they decided to discontinue it, but I loved it," he said.

With the popularity of telenovela's where a set of stories play out on screen for approximately three months through a limited series on Spanish networks like Univision and Telemundo, fans often wonder how much planning goes into the American soap operas. "I try to have a plan in mind, but I do like to be open to new ideas. If you set a plan in stone, it changes every time," Carlivati said. "We'll say this is what we're going to do in January, this is what we're going to do in February, March, etc. When you actually get there it doesn't happen that way because something takes off and you go in another direction. As long as you have some goal in mind," he continued. "The pregnancy is the easiest thing in the world because you're like 'ok, I know nine months from now there's going to be a birth. There's going to be somebody trapped in a snow storm going into labor.' You can frame your story in over a year's time. You're going to have the pregnancy and the delivery. I think that is what worked well with the story we just did."

Ultimately, when it comes down to it fans look forward to the revelations of big secrets. Storylines involving secrets and lies are always the most highly sought storylines playing out on soaps. "One Life to Live" upped the ante with major Who's the Daddy? drama. "The audience has waited for so long, so they want to see that pay off," said Carlivati. "I think that is why our double wedding was so successful because people were dying to see those reveals come out like 'Who's the father of Jessica's baby? Who's the father of Natalie's baby? Who is Rex's father?' They were ready for all of that to come out."

In part two, we'll speak with "One Life to Live" Executive Producer Frank Valentini and finally learn whether the soap will get that highly sought new opening sequence and learn more about Valentini's work ethic.