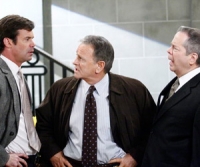 Starr helps James search for a job on MyFace, while a new girl named Deanna reads his profile on Wednesday, March 23.  Deanna spies Starr and James together.  Gigi and Blair talk about their sons.  Jack and his friends continue to torment Shane, who suffers a severe asthma attack on Thursday, March 24.  Dani wonders what is going on with Jack.  Deanna is upset at James profile picture on MyFace.  James makes a confession to Nate.  Gigi and Rex are again summoned to Llanview High.  Shane’s parents believe he isn’t being honest with them.  Meanwhile, Jack dismisses Dani’s accusations.

The Inside Story: Will the Third Time be the Charm?
Cutter is tossed to the curb when David walks in on him and Dorian on Monday, March 21.  Dorian finally forgives David.  Clint has the tables turned on him by a vengeful family member.  Joey is suspicious of Aubrey’s motives.  Joey and Kelly bond their concern for Jessica.  David thinks he and Dorian should get married.  Joey has a few questions for Aubrey.  Rama is lonely.  On Thursday, March 24, Nigel makes an admission to Bo and David.  Nora struggles to remember what happened the night Eddie was murdered.  David realizes just how Matthew looks up to Clint on Friday, March 25.  Clint reassures Matthew.  Rex stumbles upon some evidence from the Minute Man Motel.  Nora regains her memories.  Rex interrupts a romantic encounter between Aubrey and Cutter.  Joey confides in Brody.  Dorian wants Viki to be her matron of honor.  But is David getting a case of cold feet?

A Closer Look: More Than Meets the Eye
Cristian and Kelly watch as Tess makes a scene on Monday, March 21.  Ford tries to reign in Tess.  Cutter makes eyes at Tess, who later sneaks off with him.  Viki questions Dorian.  Charlie and Echo continue their tryst.  Brody and Natalie have an awkward encounter.  Tess and Cutter get better acquainted.  Charlie and Echo are unknowingly caught in the act.  John receives an earful from Natalie on Wednesday, March 23.  Natalie makes a discovery at the scene of Todd’s shooting. Shaun learns Tomas is Téa’s brother.  Blair introduces John and Tomas.  Gigi tells Tomas he made a mistake.  Natalie has something to say to Kelly.  John grows suspicious of Tomas.  Tess ridicules Ford’s hot dog costume on Friday, March 25.  Cutter lies to Aubrey.  Brody learns Tess was seen shoplifting.  And Tess loses control while with Cutter.