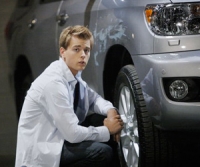 (SoapOperaNetwork.com) — A look at what’s happening on “General Hospital” during the week of March 21, 2011.

On Tuesday, March 22, Kristina continues to come between Michael & Abby. Dante is conflicted over how to deal with Michael. Michael & Abby reach out to each other. Theo forces Suzanne to make a choice. Brenda reassures Sonny of her happiness. Theo gets the truth out of Suzanne on Wednesday, March 23. Sonny & Brenda discuss the future. Carly receives a troubling message from Franco on Friday, March 25.

The Inside Story: My Baby Love
Jake passes away in the operating room in front of Jason on Monday, March 21. Jason breaks the devastating news to Lucky who is charged with the difficult task of telling Elizabeth. Matt consoles Maxie. Jax & Carly consider the options for Josslyn. Dante & Sam team up. A shaken Sam learns that she and Carly are among the possible culprits behind Jake’s hit and run. Carly asks Jason if he can allow his son to save her daughter. Elizabeth tears into Jason when he brings up the topic of organ donation. On Tuesday, March 22, Elizabeth makes a decision after talking to Lucky. Jason breaks down. Lucky opens up to Luke. Nikolas reaches out to his extended family. Michael & Kristina get their hands on the suspect list for Jake’s accident. Michael vows to do whatever it takes to protect his mother. Sam consoles Jason. Steve reaches out to Elizabeth. Carly tells a drained Jason that she may have killed his son. Port Charles continues to reel from the recent events. Jason shows up at Elizabeth’s door on Friday, March 25.