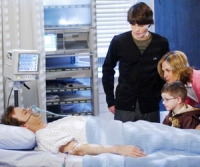 Dorian warns Viki she needs to hold on to Charlie before it’s too late.  Charlie tries to let Echo down gently on Monday, March 14.  However, what Charlie says and does are two completely different things.  Tess spies the forbidden lovers locking lips.  Clint asks Alex to help cover his tracks, and confides in Nigel.  Bo and Rex finally get some good news.  Cutter and Aubrey plot Clint’s downfall on Thursday, March 17.  Rama continues to blackmail Aubrey.  Still angry at David, Dorian gets kinky with Cutter.  David learns Rex is his cousin, and is reunited with Bo.  On Friday, March 18, the trio return to Llanview, where David walks in on Dorian at a rather inopportune moment.

The Inside Story: A Matter of Life and Death
Todd is seriously wounded in the shooting outside Rodi’s on Monday, March 14, leaving his life hanging in the balance.  Todd’s loved ones stand vigil.  John and Brody search for the shooter, and find a clue.  Meanwhile, Tomas doctors his wounds.  James and Starr’s special evening comes to a halt when they learn of Todd’s condition.  Todd is prepped for surgery on Tuesday, March 15.  Tomas keeps Blair in the dark.  Starr leans on James for support.  Jack offers to make peace with Shane.  However, Jack is forced to postpone his plans for Shane, after learning of his father’s condition.  Shane continues to lie to Gigi.  And Todd’s family begs him to wake up from his coma on Friday, March 18.

A Closer Look: A Marriage of Convenience
Baby Liam’s health scare passes.  Natalie is worried about John, and John about Liam.  Langston tells Ford it’s over.  Kelly finds John still drowning his sorrows on Wednesday, March 16.  Brody and John get into an altercation.  Kelly tries to talk some sense into John.  Viki and Natalie have a heart-to-heat conversation.  Ryder’s custody hearing gets underway.  Tess works to tone down her appearance.  Ford tries desperately to reach Langston.  At the same time, Dorian gives Langston some advice.  Nora catches Viki up to speed on Clint’s latest crimes on Friday, March 18.  Despite her anger, however, she and Clint stand united at the custody hearing.  Bo places Clint under arrest.  And the judge stands prepared to render a verdict.