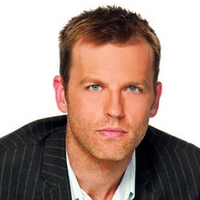 (SoapOperaNetwork.com) — Is Trevor St. John leaving "One Life to Live?" That is the question that keeps being asked, especially since his character, Todd Manning, has slipped into a coma after being shot by someone with an axe to grind with the reformed rapist. However it appears that rumors of contract negotiations and departures may have been somewhat premature.

Soap Opera Weekly is reporting that St. John is already back on set taping, which was confirmed by his co-star and onscreen daughter Kristen Alderson (Starr), who tweeted on March 21 that she was "Done with my scenes for today. Trevor and I had to do a scene 5x because we couldn't stop laughing LOL."

In an interview with Soap Opera Network, "One Life" Executive Producer Frank Valentini shared that the show was planning big spring and summer storylines for a number of characters, including Todd Manning. In the meantime, look the character to remain in his comatose state through at least April 1.

St. John joined "One Life to Live" in 2003, taking over the role of Todd Manning from Roger Howarth. He has appeared in episodes of primetime television services including "Dirty Sexy Money," "Just Shoot Me!" "Hope & Faith," and "Nash Bridges," as well as the film "The Bourne Ultimatum."