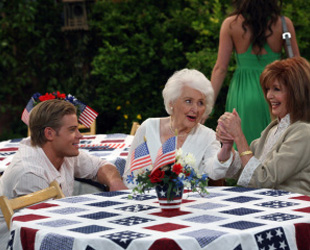 (SoapOperaNetwork.com) — With 43-years of history and more supercouples currently on air than any other daytime soap opera, “Days of our Lives” is ready to join an elite club with show 11,000.

On Wednesday, January 21, a day after President-elect Barack Obama is inaugurated as our nations 43rd President, the little soap that could, “Days of our Lives” will air its 11,000th telecast on NBC. It joins fellow daytime soaps “As The World Turns,” “General Hospital” and “Guiding Light,” as the only programs in television history to broadcast as many episodes.

Debuting November 8, 1965 on NBC, “Days of our Lives” was a soap like no other. It took place in Salem, USA. There were no witches or warlocks, nor was a woman possessed by the devil (yet). You had your simple families like the Brady’s, the Horton’s, the Williams’ and the Carver’s. Years later you would have many families come and go, including the Robert’s clan headed by Kate Roberts. Unlike Kate, however, Alice Horton remains the quintessential rock that this soap needs to hold everything together. That rock, played by Francis Reid, has been with the show since its debut and is the only surviving original cast member still there.