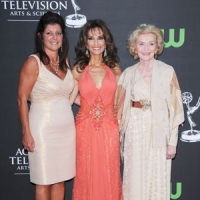 (SoapOperaNetwork.com) — After three consecutive days of waiting to hear whether or not "All My Children" was about to get the axe from ABC, as has been speculated since Deadline's article on the soap being in danger, executive producer Julie Hanan Carruthers took the time today to assure her cast and crew that the show was not being canceled by the network.

As reported on Soap Opera Digest's twitter page, Soap Opera Network has learned through sources that Carruthers made it clear that the "[cancellation] rumors are just rumors." The news was later spread through Twitter by actress Bobbie Eakes (Krystal Carey) and also by Eric Martsolf (Brady Black, "Days of our Lives") via information from "AMC's" Lindsay Hartley (Cara Martin).

According to Eakes, "AMC is not being cancelled :). But now is a great time to let the network know you'd like to keep it that way. Thanks for all the support!!" Meanwhile, Martsolf shared "AMC- not going anywhere folks. Just talked to my girl Linds. It's all good. E."

Earlier this week, Soap Opera Network was told by a network respresentative that the "[Deadline.com] piece is just another story in a long line of stories about this same topic," referring to rumors of ABC looking to cancel one of its soap operas in favor of cheaper programming. Last month, the rep denied a Daytime Confidential piece (on this same topic). Sources also confirm that [if] the network decides to cancel one of the soaps, it won't happen until after SOAPnet transitions into Disney Junior early next year. "The idea is the network wants to see how the ratings for the soaps do without the option of SOAPnet at play."

With "All My Children" apparently safe, Carruthers can now look for the shady writer that spoke to FOX News and fire their *!$#.