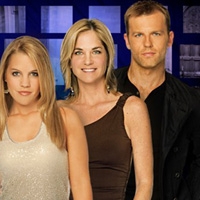 (SoapOperaNetwork) — A look at what's happening on "One Life to Live" during the week of February 21, 2011.

Clint tells Rex he isn't sorry for changing his DNA test.  Clint dares Rex to tell Bo about David.  Dorian hurls accusations at Echo, and comes close to figuring out another secret on Monday, February 21.  Viki gets a report on Echo from Dorian, who leaves out one important detail.  Dorian lets Echo know she's on to her.  And Aubrey and Cutter try to reason with Rama.

The Inside Story: Twisted Relationships
Natalie realizes that John and Kelly had sexual relations on Monday, February 21.  Brody figures out that Tess has returned.  Tess and Ford prepare to get married in Vegas.  Starr makes an admission to Langston, and comes to a conclusion.  On Tuesday, February 22, Viki and Clint are brought up to speed on Jessica.  Langston provides Brody with a clue.  Ford and Tess bicker, and she warns him to keep quiet.  Brody gets a lead on the unhappy couple's whereabouts. Langston leaves town.  Kelly makes a confession to Blair. Natalie wonders why Joey is still worried about Kelly on Thursday, February 24.  Joey and Natalie put down their old loves' new flames.  Echo leaves John with some good advice.  Kelly tries to extend a piece offering to Natalie.  John's actions leave Natalie with the wrong idea.  Kelly and Joey argue.  Joey assaults John.  And Langston and Brody each hope they're not too late.

A Closer Look: Kids Gone Wild
Todd and Téa search for Dani.  James is hiding something.  Jack continues to bully Shane.  Matthew is less than sympathetic to Shane's plight.  Todd and Téa argue over how he handled the situation with Dani and Nate.  James confides in Starr.  Dani contacts Todd saying he needs time to cool off.  Learning the truth, Téa keeps Todd in the dark on Wednesday, February 23.  James and Starr leave to meet up with their siblings.  Meanwhile, Tomas takes Blair by surprise.  Blair's comments peek Tomas' interests.  Téa finds a familiar face on her doorstep.  And Todd's mood goes from bad to worse on Friday, February 25.